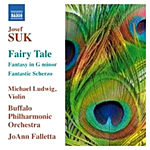 You have to give conductor JoAnn Falletta and her Buffalo Philharmonic credit for tackling works that are somewhat out of the mainstream, music from the likes of John Corigliano, John Duffy, Kenneth Fuchs, Daron Hagen, Jack Gallagher, John Powell, and Marcel Tyberg, as well as more familiar folks like Richard Strauss, Franz Schubert, and Ottorino Respighi. On the present disc she undertakes the music of violinist, teacher, and composer Josef Suk (1874-1935), whom more people probably know in his native Czechoslovakia than know him in America. Indeed, people may even know him better as Antonin Dvorak's son-in-law than as a musician and composer of tone poems. He was first a student of Dvorak and then married Dvorak's daughter. But both his mentor and his wife died in the years 1904-05, devastating the man. The music we get on this disc, however, comes from earlier and happier times.

The program opens with the Fantasy in G Minor, Op. 24, which Suk wrote in 1903. It begins with a healthy blast of sound and then moves into kind of Bohemian Gypsy territory, where we hear the influences of Dvorak and something of Hungarian composer and pianist Franz Liszt. I'm not sure what this twenty-three-minute piece represents, but with violinist Michael Ludwig lending it a delicate tone and Ms. Falletta providing a sympathetic and often robust accompaniment, it is surely captivating in its varying moods, from sentimental to exuberant.

The centerpiece of the album is Suk's Pohadka (Fairy Tale), Op. 16, from 1898, a suite of four movements drawn from music he wrote for a theater piece. Much like Rimsky-Korsakov's Scheherazade, with flashes of Smetana's Ma Vlast, the Fairy Tale describes events in the lives of two lovers, a Prince and Princess from rival kingdoms and their conflict with an evil sorceress. The section titles are self-explanatory: "About the constant love of Raduz and Mahutena and their trials"; "The game of swans and peacocks"; "Funeral Music"; and "Runa's curse and how it was overcome by true love."

Like his Russian and Czech counterparts, Suk provides plenty of color in this music, and like Richard Strauss and other tone poets of his day, he conjures up vivid images in his compositions. Falletta and her players seem almost joyous in their desire to make these stories come to life, with Ludwig's violin always sweet and light. No, Suk's music does not convey the same exquisite beauty or elicit the same excitement as Rimsky-Korsakov's Scheherazade does, and Suk's suite gets more than a little bombastic toward the end, but that doesn't stop the performers from giving it their best shot.

The program ends with the Fantasticke Scherzo in G Minor, Op. 25, from 1903, another evocative work from Suk. It was for me, unfamiliar with this music, the highlight of the disc, reminding me in part of Mendelssohn and Bax. Lilting, airy, flamboyant, and a little overwrought, it is nevertheless mostly delightful in its rustic, bucolic way. As always, Ms. Falletta and her forces play it with a zesty charm.

Is any of this great or memorable music? No, Josef Suk has not quite made it into the pantheon of truly important classical composers, and his works are not (yet) a part of the basic orchestral repertoire. Nevertheless, that doesn't mean one shouldn't seek him out and appreciate his music for the moment. It is highly accessible and easily enjoyed, especially when it's as well played as it is here.

Naxos made the recording at Kleinhans Music Hall, Buffalo, New York, in May of 2010, capturing a big, splashy sound that does justice to the music. There is an ample dynamic range, strong impact, good clarity, and a fine sense of air around the instruments to satisfy most discerning listeners. Then, too, a fairly wide stereo spread and a realistic illusion of stage depth add to the recording's verisimilitude. Highs ring out with sparkle, clearly and effortlessly, and the bass makes a statement when necessary. The violin featured so prominently throughout the selections never overpowers the orchestra or vice versa, the audio engineers nicely balancing it against the other instruments. This is entertaining, largely playful light music served up in equally pleasing sound.

Email ThisBlogThis!Share to TwitterShare to FacebookShare to Pinterest
Labels: Suk