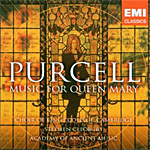 The Choir of King's College, Cambridge, has been recording some wonderful music for many, many years, and this album, containing music written for Queen Mary between 1692 and 1695, is among the ranks of their very finest work.

The Ode for the Birthday of Queen Mary (1694, "Come, ye sons of Art") by Henry Purcell (1658-1695) is one of the English composer's most-famous and well-loved pieces, so it appropriately leads off the program. But it is the funeral music (1694) for the Queen that stands out in my mind. The first performance took place for a ceremony several months after the Queen's death, and while the music is obviously solemn and austere, it is illuminating and heartfelt, too, with a startling "Drum Processional" that is almost uncanny. Stephen Cleobury, the Academy of Ancient Music, and the Choir of King's College do a splendid job opening up this music for modern audiences.

The choir sound wonderfully lifelike in an EMI recording that one must note for its natural setting, its ambient glow, and its superb spacial characteristics. The overall tonal balance is near perfect, with the choir well integrated into the surroundings, although there is a softness to the presentation that might not please everyone. Depending on your audio system, the sound of the recording, made in the Chapel of King's College, Cambridge, may seem a little too reverberant, even dull or veiled, but I found the sound quite pleasing and realistic.

Email ThisBlogThis!Share to TwitterShare to FacebookShare to Pinterest
Labels: Purcell