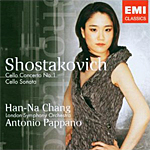 After listening mainly to the symphonies for so long, it's hard for me to remember that Russian composer Dimitri Shostakovich (1906-1975) could have his lighter moments as well. Not that his Cello Concerto of 1959 or his Cello Sonata of 1934 are lightweight by any means, but by comparison to his really heavy and often sardonic symphonies, they can seem positively blithe.

The Cello Concerto No. 1 begins robustly, moves into a relatively pensive Moderato, followed by an unaccompanied Cadenza, and concludes as it began with a vigorous Allegro. Some observers have found a trace of the composer's condemnation for Soviet anti-Semitism in the music, but it works best as a straightforward, assessable, and highly enjoyable piece of non-biased music. Probably the most famous recording of the work is Rostropovich's on Sony, recorded just after the composer premiered the work in 1959. But on the present recording Ms. Chang acquits herself quite well, and I can't imagine anyone complaining about her lack of spirit or sensitivity or conductor Antonio Pappano and the London Symphony not lending her the utmost support.

The Cello Sonata is perhaps a touch more bizarre than the Concerto because Shostakovich wrote it in response to Stalin's dictate for "Socialist Realism," whatever that meant. Well, it appears to have meant whatever music or literature that Stalin happened to like, meaning ultraconservative. So Shostakovich gave his Soviet master what he wanted, to a point, with what appear to be fairly sedate opening movements, followed up by a finale that turns into an old-time Keystone Kops silent comedy. It's pretty amusing, actually. This time Antonio Pappano accompanies Ms. Chang on piano, both of them poised and primed for action.

EMI made the recording in their celebrated Abbey Road Studio One, where the London Symphony sounds well balanced and well focused, if a touch forward for my taste. In the Concerto, the engineers spread the orchestra well out across the sound stage, and in the Sonata they offset the two players realistically.