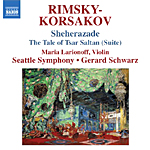 Russian composer Nikolai Rimsky-Korsakov (1844-1908) wrote his symphonic suite Sheherazade in 1888, describing it as "a kaleidoscope of fairy-tale images and designs of oriental character." As such, it really isn't so much descriptive as it is evocative, with only the narrator, the beautiful slave girl characterized by the solo violin, being a specific representative element.

The composer did give the four movements in the suite names, however, which he later withdrew. Nevertheless, they persist. "The Sea and Sinbad's Ship" (Prelude) sounds wonderfully smooth, flowing, light, and airy under the conductorship of Gerard Schwarz and his Seattle Symphony players.  Schwarz emphasizes the lyrical qualities as well as anybody, nicely catching the beauty and rhythms of the piece. "The Kalender Prince" (Ballade) displays a pleasingly glamorous touch, the exotic Middle-Eastern motif exploited to the fullest. Moreover, concertmaster Maria Larionoff's violin solos (she plays on a 1775 Guadagnini) as the young narrator are sweet and delightful.

Under Maestro Schwarz, "The Young Prince and Princess" (Adagio) is appropriately romantic and engaging, taking us to "The Festival at Baghdad--The Sea" (Finale), which Schwarz ensures is as thrilling as it is dashing.

The program concludes with an orchestral suite from Rimsky-Korsakov's opera The Tale of Tsar Saltan. It is brief, four movements of two-to-seven minutes each, but it carries with it the same kind of fairy-tale qualities we find in Sheherazade, if not quite so entrancing.

Although Schwarz produces a commendable Sheherazade in almost every way, there is formidable competition available, much of it at the mid-price point, and unless one has to have the music in the very latest digital sound, there are other recordings to consider. For example, Fritz Reiner (RCA or JVC) is more exciting; Bernard Haitink (Philips) is more poetic; Kirill Kondrashin (Philips) is more dramatic; Sir Charles Mackerras (Telarc, also digital) is more expressive; and Sir Thomas Beecham (EMI) is more magical. What's more, all of these older recordings sound equally good as or better than the Schwarz Naxos disc.

Recorded at Benaroya Hall, Seattle, Washington, in 2010, the audio is among Naxos's better efforts. It is full and wide ranging, with decent impact, a broad dynamic spread, and sparkling highs.  Midrange transparency comes through nicely, and stage depth, while modest, is realistic. Although the deepest bass is somewhat light in Sheherazade, the mid-bass more than makes up for it. Besides, the deep bass comes through much better in The Tale of Tsar Saltan, which Naxos recorded a month or so later with what seems like different miking. Perhaps not in the absolute top tier of audiophile recordings, the sound, nonetheless, should disappoint no one.