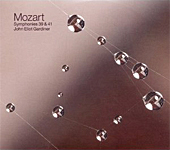 I always cringe when I read the words "Recorded live" on a disc's packaging because usually it means the sound is not going to be as good as a studio production. In this case, the sound is fine, and I'll get to it in a moment.

John Eliot Gardiner has long been a leading light, a guiding star, in the field of period-instruments performances, and these recordings of Mozart's Symphonies Nos. 39 and 41 (both from 1788) with the English Baroque Soloists are good examples of his work. They are dynamic, energetic, and spirited. If they lose a little something in the way of good cheer along the way, well, I suppose that is just how Gardiner views them. I would have preferred the music done a little more joyously, but he's the conductor here, not me.

In the Symphony No. 39 in E flat major, K.543, Gardiner begins the Adagio with a somewhat heavy hand, but then he begins to inject more life into it as it goes along, finally achieving a pleasant balance. Although the Andante has a decidedly masculine feel about it, one has to understand these later Mozart symphonies are the biggest, grandest purely orchestral works he wrote, so Gardiner has every right to approach them in a big, exalted style. The Minuet seems a bit clumsy at first, even for a period-instruments band, yet it, too, settles into a sweetly lilting pattern within a few minutes. Gardiner then takes the Finale at a brisk pace, infusing it at the same time with a degree of splendor that does it justice.

Mozart's last symphony, No. 41 in C major, K.551 "Jupiter," is his crowning jewel. While it should sound majestic and imposing, the best conductors have also imbued it with an unbridled joy. Gardiner's is a solid performance, to be sure, but it does seem a little more somber than those of, say, Jochum (DG), Beecham (EMI), Bernstein (DG, also live), or Barenboim (EMI), who inject more magic and more electricity into the proceedings. On the other hand, among period-instruments renditions, Gardiner's must rank very high.

Now, as to the recording, I can understand some listeners wanting to enjoy the spontaneity and animation of a live performance. And I can understand the desire of record companies wanting to make a disc as economically as possible; after all, it's cheaper to record a performance already paid for by an audience than have to drag all the players into a studio for several sessions. In any case, Soli Deo Gloria recorded this Mozart concert live at Cadogan Hall, London, in 2006, the resultant sound more than adequate for most of its course, and in some instances almost startlingly lifelike.

However, any time there's a lull in the music, we hear a good deal of paper rustling and feet moving, interspersed with occasional wheezes and coughs. Otherwise, expect excellent stage depth from the orchestra, miked at a moderate distance; a realistic string tone; plenty of midrange detail; a wide dynamic range and impact; decent bass and highs; and a pleasantly ambient environment, with a touch of fairly heavy resonant bloom. Unfortunately, there is a blast of applause at the end one has to put up with. I guess people get used to it; I never do.