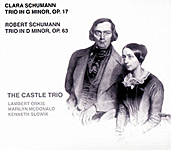 German composer Robert Schumann (1810-1856) and his wife, pianist and composer Clara Schumann (1819-1896), seemed meant for each other, just as the pair of piano trios on this disc, one by each of them written around the same time, seemed destined for one another. The pairing on the disc reflects a concert the Schumanns gave at their home in 1847 and which many artists repeated throughout the nineteenth century. Oddly, however, there are few or no current recordings besides this one that pair the two Trios.

We're fortunate, then, to have this Smithsonian FoM record of the husband-and-wife Trios, performed on period instruments by the Castle Trio, making the program probably as close to the one heard in the Schumann home as we'll get. The Castle Trio, made up of pianist Lambert Orkis (playing a piano by J.B. Streicher, Vienna, 1846, from the Frederick Collection), violinist Marilyn McDonald (violin by Andrea Guarneri, Cremona, 1670), and cellist Kenneth Slowik (violoncello by Carlo Antonio Testore, Milan, ca. 1730), play the works with due affection.

First up is Clara Schumann's Trio in G Minor, Op. 17, from 1846. It takes a while for the opening theme to reveal itself after a fairly somber introduction, but once it does open up, it's quite lovely. Following that is a delightfully frothy little Scherzo in the manner of Mendelssohn, which the Castle Trio handle with a light touch. Although the slow Andante doesn't really hold up as well as the rest of the piece, the concluding Allegretto is quite charming, with, again, the Castle Trio imbuing it with perhaps more passion than Ms. Schumann might have imagined when she dismissed it as "effeminate and sentimental."

Robert Schumann wrote his Trio No. 1 in D Minor, Op. 63, in 1847, the first of three trios he would write (two of them simultaneously). It is generally more serious than Clara's Trio, yet it is still "youthfully fresh and powerful" as Clara described it. Besides, it does tend to become less grave as it proceeds through its four movements. The Castle Trio afford it their utmost respect, treating it earnestly yet playfully.

Recorded at the Ashburnham Community Church, Ashburnham, Massachusetts, in 1992 (released in 2010), the sound is a little warmer, softer, and fuller than previous FoM productions I've reviewed. The players in the Castle Trio appear more tightly grouped and the miking closer than in FoM's other chamber recordings. There's a pleasantly solid impact that helps with the realism, though, and the sound is cushy and comfortable, making the three-player ensemble seem bigger than it is. Nevertheless, the size and richness of the acoustic complement and make more mellow the period instruments, which do, in fact, sound splendid, with an excellent balance among the instruments.