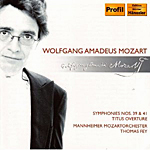 I never had any doubts about the sonic merits of this recording from the opening notes. It sounds terrific. But I did question whether it was a period-instruments band playing, given that the first few moments of Symphony No. 39 feature timpani prominently, and they certainly sounded like period drums. Yet the strings seemed modern. It turns out that maestro Thomas Fey and his Mannheim Mozart Orchestra use period performance practices and period timpani and brass, but at the same time they use modern strings. So, it was just as I thought: They use the best of both worlds, and the results, while different, are worth a listen.

Fey and his players take moderate tempos, yet they are lively and energetic, too. He doesn't conduct either symphony in quite as exhilarating a manner as Daniel Barenboim plays them in his old EMI English Chamber Orchestra readings, but Fey is nevertheless on his toes.

Symphony No. 39 is especially buoyant after its somewhat somber introduction, but it's the "Jupiter" Symphony that is the marvel. At first I had some doubts about the rather leisurely pace of the first movement introduction and again during the third movement Minuetto, but the conductor puts all doubts to rest as things warm up. Never too fast, never too slow, Fey seems to have a knack for picking the right pace and spicing it up with the right dynamic contrasts. Maybe the "Jupiter" doesn't have quite the overall sparkle of Eugen Jochum's celebrated DG recording with the Boston Symphony, but I think the listener will find joys here of their own.

So, just how much did I really like these interpretations? After listening to both works, I immediately sat through them a second time. Yes, the performances impressed me that much. However, I wouldn't consider them first-choice recommendations; they're a little too different for that.

The sound the Profil engineers get on this 2005 recording is quite clear and clean, with a wide stereo spread, excellent transparency, and strong transient impact. One must count the sonics here among the better one can find in these Mozart symphonies, even though the timpani and brass are quite prominent.