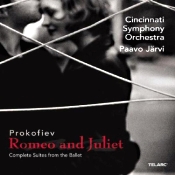 If you already have Prokofiev's complete Romeo and Juliet ballet (my favorites are from Andre Previn on EMI and Lorin Maazel on Decca), or if listening to the whole ballet doesn't interest you, or if you can't find Erich Leinsdorf's excellent highlights from the ballet on a Sheffield gold disc, then Paavo Jarvi's 2003 Telarc release of the three suites is as good a choice in this music as most any around.

Prokofiev completed his ballet in 1935, but it hardly met with instant success. The Bolshoi rejected it as too difficult to dance to, and Prokofiev presented the first two suites from the work in public before premiering the ballet itself, which didn't get an official performance until 1940. In 1946 the composer gleaned a third suite of music from the complete work, and Telarc give us all three suites on the present disc.

Since Prokofiev intended this particular music to be highly descriptive, the composer taking us carefully through Shakespeare's play practically scene by scene, he opens the score to a wide range of interpretation. I thought Jarvi sometimes seemed a bit too rushed, as in the episodes describing the young Juliet, but one can understand Jarvi's intention in showing us a very youthful, high-spirited, and perhaps immature girl. Mainly, though, Jarvi keeps his attention focused on the music and clearly establishes the nature of each character and each event. 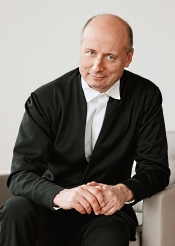 I've always thought Suite No. 2 contained the best music, with No. 3 something of an afterthought, but Jarvi gives each piece the concentration it deserves. The only real problem is trying to follow the storyline when the suites sort of jumble up the plot events. Still, it's the music that counts, and Jarvi does well enough to convey the score's color, grace, and excitement.

The Telarc engineers recorded the music in November 2002 and February 2003 in the Music Hall, Cincinnati, Ohio. They appear to get some of their best sound out of the Cincinnati players, whether it's the Symphony Orchestra or its counterpart Pops ensemble, and this disc is no exception. I admit there is a degree more hall haze and bass resonance than in many of Erich Kunzel's pop-classical recordings for Telarc and consequently a little less definition, but Telarc nonetheless afford Jarvi some decent acoustics. While the bass sounds especially prominent, as it should sound in things like the "Dance of the Knights," "Montagues and Capulets," and the big death scenes, the subtler sequences are notable, too, particularly for their quiet moments. The sound is closer to that of a live, resonant musical experience than it is to typically ultra-clear audiophile-type sonics, and as such it's fine.

With all-around good performances and attractive concert-hall sound, this one makes an easy recommendation, if maybe not quite a first choice.