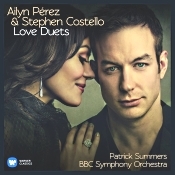 First, a word about the principals: The Associated Press called soprano Ailyn Pérez and tenor Stephen Costello “America’s fastest-rising husband-and-wife opera stars,” and the New York Times praised them for their “palpable chemistry.” They were both honored as winners of the prestigious Richard Tucker Award (Costello in 2009 and Pérez in 2012), and on the present debut album for Warner Classics they perform a selection of love duets from opera and musical theater.

Anyway, what could be more appropriate for two young stars in love, especially for their first album, than a collection of love duets? Of course, they’re both in fine voice; there’s not much question about that unless you’re a fervent opera fan and have an obsession for particular kinds of operatic voices. For most of us, they sound just fine, if perhaps not yet in the superstar class where a tenor and soprano can go virtually anywhere with their talents. Let’s say that with Perez and Costello, it’s close enough.

As usual with these things, the opening number sets the tone. Both singers display a tremendous vocal range as well as a wide emotional sweep. Obviously, these love duets require a fair amount of dramatic skill as well as vocal talent, and here Perez and Costello shine. Of course, like any subjective talents, their voice and dramatic skills remain open to interpretation. One listener might find them impressive, another satisfactory, and still another annoying. I didn't find any distracting mannerisms in their singing or acting skills, but I'm no expert in things operatic.

There is certainly nothing halfhearted about their presentations. They belt out the songs in splendid form, perhaps too intensely at times; but surely you can't fault their enthusiasm. The two opening numbers, for instance, by Massenet and Mascagni, seem almost extravagantly expressive. While the singers convey the big, dramatic moments effectively, they don't always provide a commensurate degree of lyricism in the softer passages. But, again, this is just how the songs struck me personally; other listeners will surely find the presentations both moving and exciting.

And so it goes through the classical operatic numbers. I particularly enjoyed the playfulness in their rendering of the first Verdi selection and the passion of the second Verdi item and the Puccini. 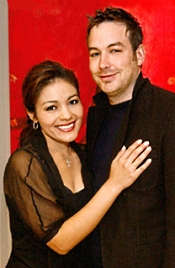 It was with the final tracks, the four Broadway selections, that I had any initial hesitation. I worried at first that Perez and Costello’s operatically trained voices might be too heavy for the lighter stage roles. They swept aside my concerns, however, offering up perfectly enjoyable versions of all four songs. Their voices are perhaps bigger than we might find on the popular stage and, thus, take a moment's getting used to, but once attuned to them, they easily win us over. OK, maybe the Guys and Dolls number requires a stretch to imagine, chiefly Costello as a colorful Damon Runyon character; but, hey, if Brando could almost pull it off in the movie version of the play, I guess you can get used to anybody. The closing Kismet selection is possibly the best of the Broadway items because it comes closest to grand opera, anyway.

Producer Stephen Johns and engineer Philip Burwell recorded the music in December 2013 at Studio 1, BBC Maida Vale, London. The sound is slightly aggressive; that is, the frequency balance favors the upper midrange, making some high notes a little shrill and glassy, occasionally even fierce. The voices are out front, as we might expect, the orchestral accompaniment a bit recessed and a tad soft. It sounds, in fact, a bit more like pop-music sound than it does classical, the latter usually a tad more natural. Still, given the nature of the album, that's probably not a bad thing; the sound will complement a lot of home playback systems and car radios and no doubt appeal to folks used to listening to popular music on TV and iPods. I don't mean to be too critical here, but for the ultimate in sonic realism, you might want to look elsewhere. This is just good, clean, in-your-face sound.