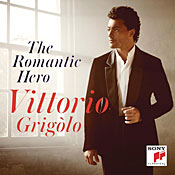 Here is the next installment in a series of recordings by the Italian operatic tenor I've only recently heard of. That's still not saying much, however, because I know very little about the current state of things operatic. Whatever, The Romantic Hero is Vittorio Grigolo's fifth solo album, most of them devoted to short operatic selections rather than full-length operas. It doesn't seem to matter because audiences appear to love him, and maybe the brevity of the tunes appeals more to a mass audience.

Grigolo grew up in Rome and was singing by the time he was four. He was nine when he started doing his own version of "Ave Maria," at which point his father had him audition for the Sistine Chapel Choir. There, Gigolo become a soloist with the choir, also studying for several years at the Chapel's Schola Puerorum. By his early teens he was singing at Rome's opera house; and at eighteen he joined the Vienna Opera Company, by age twenty-three becoming the youngest man to perform in Milan's La Scala.

Today, Grigolo is in his mid thirties and apparently a heartthrob the world over. Or so people tell me. On the present album he sings heroic roles from French opera. Why French opera? As Grigolo explains, "The Italian way of singing is native to me. But sometimes in life we change course to follow a sign that is not the one of our birth; instead we go forward in the ascendant. The French hero is my ascendant. It's the hero that makes me feel alive when I am on stage." Fair enough.

Grigolo gets plenty of chances on the program to show off not only his power, tone, and control but his lyricism. That latter quality is probably the keynote of the present album, the selections carefully chosen to highlight the tenor's sweet intonation and well-judged inflections. In this regard, French opera seems perfectly suited to his voice, Italian or not. 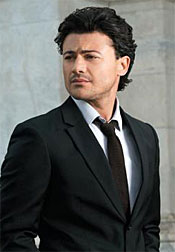 For me, being but a fledgling in the field of opera, Grigolo's voice seems fine, although I thought at times there was a little more vibrato in it than I'm used to. Still, it adds to the lyric characteristics of most of the music. Otherwise, he floats the notes in fairly pure fashion, and when he needs to pour on the strength, there is plenty in reserve. The Faust selection demonstrates this ability to good effect, the hushed, quiet moments most telling. He hasn't perhaps the ability (yet) completely to thrill a listener and make one's hair stand on end the way a Domingo or Pavarotti have, but he does provide compensating dramatic skills that make his performances pleasurable.

The orchestra under the directorship of Maestro Pido does its best merely to stay out of Grigolo's way, and rightly so as this is his show from beginning to end. Soprano Sonya Yoncheva accompanies Grigolo on the "Instant charmant" and "Va! Je t'ai pardonne" tracks but, again, one hardly notices (although, to be fair, Ms. Yoncheva fares better in the second number).

Favorites? Everyone who listens to the disc will have favorites, and they will invariably be different. I enjoyed the Meyerbeer and Offenbach selections the most, but I am perhaps overly sentimental. They come through with a poignant spirit and moving grace.

One thing's for sure: Grigolo will not leave his fans disappointed with this album. There's enough romance to go around and enough force and conviction to reach almost any heart or mind.

Producer Chris Alder and engineer Douglas Ward recorded the songs at the Auditorium RAI "A. Toscanini," Torino, Italy in June and July, 2013. The voice is full and round, smoothly realistic, with very little shrillness or edginess except a trace in loudest passages. However, it is very close, up front, with the orchestra well behind. The orchestral sound is warm, slightly soft, and comfortable, often not even noticeable. The accompaniment, in fact, seems mostly perfunctory, the voice being the main thing here.