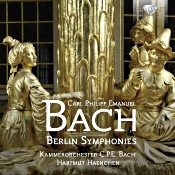 It seems that every few years we go through a C.P.E. Bach renaissance. C.P.E comes and goes in the public's consciousness, and these days he appears to be in again. With that in mind, I thought it of interest to review this 2014 Brilliant Classics reissue of a spirited 1985 Capriccio album of C.P.E. Bach's Berlin Symphonies from Maestro Hartmut Haenchen and the C.P.E. Chamber Orchestra.

Carl Philip Emanuel Bach (1714-1788) was the eldest of Johann Sebastian's several musically inclined children (actually the fifth child and the second son), and, more important, he's the one who gets most of the attention today. C.P.E. falls into the transition period between the Baroque and Classical eras, and thus we find elements of both styles in his music. His own approach to music combined the best of both worlds, although he leaned toward what critics of the time called the "sensitive style"; that is, one that expressed "true and natural" feelings with sudden contrasts in mood as opposed to the more-popular "rococo style" that emphasized simplicity and immediacy of appeal.

In any case, the present disc contains five of the nine symphonies C.P.E wrote while living in Berlin (1738-1768). A booklet note tells us that audiences of the day tended to judge the worth of a composition on its degree of novelty, and "the widespread acclaim that C.P.E. Bach won all over Europe was due in large measure to his originality and wealth of invention." In the words of musicologist Jan LaRue, "Once a Bach symphony has got under way in the usual fashion, some intriguing detail may 'crop up' any moment: a forbidden dissonance, a mighty thunderclap, a headlong rush downwards, an abrupt change of tempo or a surprising modulation." And so it goes with the five symphonies on Maestro Haenchen's disc. 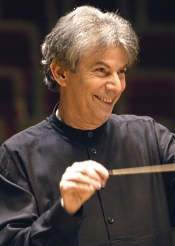 That said, Maestro Haenchen's performances of these little three-movement symphonies are lively and invigorating, providing much charm in the process. They bustle with good cheer, vitality, and brilliant playing. There is nothing lax about the slow movements, either; indeed, if anything, Haenchen takes them a tad too quickly for my taste. But he is imaginative, keeping Bach's invention foremost in mind, and sometimes that requires a fairly vigorous and flexible tempo.

In the Symphony in F (H656), for instance, the last of the Berlin symphonies Bach wrote, Haenchen pounces on every contrast and every turbulent characteristic he can find, emphasizing them with zest. In the Andante, he maintains a strong forward momentum, and in the concluding Allegro assai he provides a welcome sense of fun.

And so it goes. I can't say I really loved any of these symphonies, despite Bach's attempts at doing daring things for his day and the critical acclaim he received. The music continues to sound rather too much the same to me, a bit too formulaic. (H650 sounds the most modern, "modern" for the times in any case.) Nevertheless, I can't imagine this music being any better played than it is here, unless maybe, as I've said, the orchestra had played it on period instruments.

The C.P.E. Bach Chamber Orchestra made the recording for the Capriccio label at Christuskirche Berlin in March 1985, with producer Heinz Wegner and recording engineer Hartmut Kolbach taking care of the technical details. Brilliant Classics reissued the disc in 2014. The orchestral sound seems a tad bright, but there's no questioning its clarity, openness, and air. I liked how well the detail and definition come through, and I enjoyed hearing the ensemble's scope and depth and dimensionality, even if it comes at the expense of some small degree of natural warmth.

Email ThisBlogThis!Share to TwitterShare to FacebookShare to Pinterest
Labels: Bach.C.P.E.