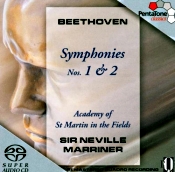 I was talking to a friend recently who reminded me that as time goes on things may evolve and grow different, but they don't necessarily get better. Conductors fit into this category, too. Not all of the great conductors of the past necessarily got any better with age than they had been; indeed, some of them simply grow old and stodgy. But thank goodness we have recordings to preserve the great ones in their prime, such being the case with Sir Neville Marriner and his wonderful 1970 recording of the Beethoven First and Second Symphonies.

We take for granted today a small chamber orchestra playing early Beethoven, often on the same period instruments Beethoven had in mind. But do we recognize that Sir Neville was among the first persons actually to effect something like this with his Academy of St. Martin in the Fields? By paring down what had become traditionally big-scale orchestral music, with often inflated interpretations for full orchestras, Marriner was able to show us the grace and inner beauty of the composer's first two symphonic efforts, if on modern instruments. 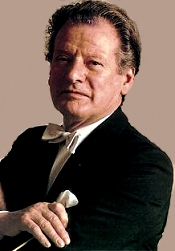 I had not heard Marriner's recordings of these works in years before listening to them again on this 2003 PentaTone remastering, and I was amazed at how well they held up, comparing to any recordings of these pieces by any conductor at any price. Not only do the two symphonies come off as elegant and refined, as we would expect of Sir Neville, but they are wholly charming, flexible, supple, enchanting, exciting, and exhilarating as well. These early symphonies may not match what the great composer had in store for us next with his monumental Third Symphony, but Marriner renders these first two of Beethoven's symphonic works as both felicitous extensions of the Classical age and clear precursors of the Romantic era.

The sound holds up equally well, too. Recorded initially by Philips in quadraphonic, the company only released them on LP in two-channel stereo. Yet here they are available, as usual with PentaTone, on a hybrid SACD stereo/multichannel disc in both two and four-channel sound. What's more, the PentaTone engineers remastered them from the original tapes, and they sound at once smooth, spacious, transparent, warm, and natural. I liked almost everything about this disc and its performances, and even after more than four decades they can stand alongside the best available in this repertoire.