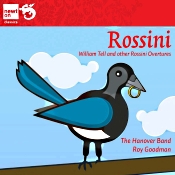 There isn't exactly a shortage of Rossini overture recordings on the market, but there are surprisingly few of them done on period instruments in historically informed performances. For the past couple of decades the two leading contenders in this specialized field have been Roy Goodman's recording with the Hanover Band, reissued here by Newton Classics, and Roger Norrington's renditions with the London Classical Players on EMI (now Warner Classics). Of the two, Norrington is probably the more refined, more cultured, but I've never been entirely sure that was what every prospective buyer of a period-instruments recording wanted. Goodman's accounts appear just as well played but a bit more rustic and bucolic. It's good to have them back in this mid-priced release.

Goodman provides seven of Rossini's most-famous overtures including La scala di seta ("The Silken Ladder"), L'Italiana in Algeri ("The Italian Girl in Algiers"), Il barbiere di Siviglia ("The Barber of Seville"), La gazza ladra ("The Thieving Magpie"), Semiramide, Le siege de Corinthe ("The Siege of Corinth"), and Guillaume Tell ("William Tell"). It's interesting to note that most of Rossini's overtures have become more popular and receive more performances than the operas from which they come.

Anyway, the program begins with La scala di seta, which pretty much sets the stage for the rest of the selections. Not only do we hear the characteristic sound of a period ensemble, especially from the strings and percussion, but we get tempos that seem neither exaggerated nor tedious. In fact, they always sound just right, with any variations needed to provide contrast. What's more, the orchestra play with admirable virtuosity and zeal, and the audio engineers capturing them in a well-balanced manner. This is a far cry from some shrill, raggedy-Annie period performances with claims to historical accuracy at the expense of listenability. 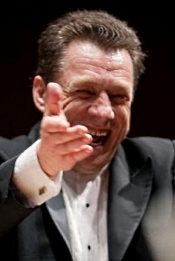 And so it goes throughout the program. I particularly enjoyed the dynamic impact in L'Italiana in Algeri, the spirited enthusiasm in Il barbiere di Siviglia, and those blazing timpani in La gazza ladra. Goodman's performances are bold yet pleasingly stylish, providing thrills and thought in equal measure.

Which brings us to the William Tell overture, whose celebrated closing galop ("March of the Swiss Soldiers") stirred every kid's imagination in The Lone Ranger. The piece begins with three sections describing the prelude to a storm, the storm itself, and the calm following the storm. Goodman handles these segments in appropriately colorful interpretations, the storm getting a remarkably blustery treatment. And that final heroic galop? While it may not convey all the visceral excitement of some other renditions, it should prove gracefully enduring.

Producer Andrew Keener and engineer Tony Faulkner recorded the music originally for RCA (BMG Classics) at Abbey Road Studios, London, in 1994, and Newton Classics reissued it in 2014. In terms of sonic quality, naturalness and clarity are the orders of the day. Definition sounds commendable and dynamics are wide and strong, while an overall smoothness ensures that the proceedings go as realistically as possible. A modest hall resonance helps, along with a moderately distanced miking arrangement. Additionally, there is a fair amount of orchestral depth and spaciousness to add to the illusion. It makes for an appealing audio experience, maybe not quite as transparent as the sound for Norrington on EMI but not quite as bright or aggressive, either.