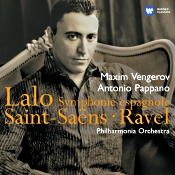 Maybe at the time I wrote this review it was French composer Edouard Lalo's (1832–92) turn in the sun. I had no sooner reviewed a Naxos disc of the Symphonie espagnole, saying it didn't get recorded nearly as often as it should, than this 2003 release of the Symphonie arrived from EMI with Maxim Vengerov playing the violin, Antonio Pappano directing, and Philharmonia Orchestra in support. If I had some minor qualifications about the Naxos issue, I had no such reservations about the EMI and can continue to recommend it heartily, reissued under its new label, Warner Classics.

The Symphonie espagnole, which despite its title is actually a concerto for violin, is  fine, of course, and Vengerov plays it with appropriate sparkle, polish, and élan. But it's really the accompanying piece, the Third Violin Concerto by French composer and pianist Camille Saint-Saens (1835–1921), that knocked me over, especially the work's slow middle movement, the Andantino. I've seldom heard it sound so ravishingly beautiful and expressive. It's probably the one piece by Saint-Saens that comes closest to the serene loveliness of his "Swan" from the Carnival of the Animals, and Vengerov makes the most of it. 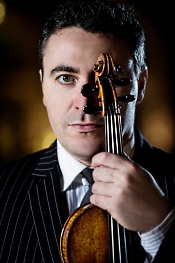 Anyway, Vengerov produces a ravishing tone with his violin, and Pappano and the Philharmonia Orchestra provide sympathetic support in both works. Along with a brilliant performance of Maurice Ravel's Tzigane, Rhapsody de concert the program makes a most-attractive hour or so of music making.

Like the Naxos disc I had listened to previously, the EMI disc sounds wide ranging and natural, but with the added benefit of greater clarity. For this review, I compared the 2003 EMI to an older, 1976 EMI disc of the Symphonie with violinist Yan Pascal Tortelier, Maestro Louis Fremaux, and the City of Birmingham Symphony Orchestra, plus a newer, 2013 Warner Classics disc with violinist Alexandre Da Costa, Maestro Carlos Kalmar, and the Orquesta Sinfonica de Ratio Television Espanola. Here, it was the Vengerov disc that sounded slightly more open and more transparent to me. I still have no hesitation recommending the Naxos, the earlier EMI, the later Warner Classics disc, or even some real oldies including Heifetz and Stern, among others, but if one wants to sample all of the best, the Vengerov disc (as I say, now available from Warner Classics, who took over the EMI label) is well worth one's investment of time and money.