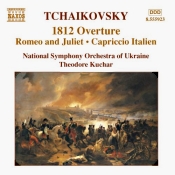 This disc was something of a puzzlement to me when I first received it some ten years ago. Why in the world, I thought when I first saw it, would Naxos believe anyone needed another 1812 Overture? Likewise with the attendant material on the program. I mean, even at a low Naxos price I can't imagine too many people willing to invest in something of which they probably already have multiple copies. Of course, there may be young people who have just bought their first audio system, who don't own Tchaikovsky's 1812 Overture, and who want something to show off their new gear. But in that case, why chose this particular 1812 or this particular disc?

The album begins inauspiciously with Maestro Theodore Kuchar's somewhat prosaic, almost lackadaisical rendition of the Capriccio Italien. Part of the fault here may lay in the Naxos sound, which for the first three-quarters of the piece sounds as though someone had turned off the bass. Then the highs start to come forward and recede as though the engineer were fiddling needlessly with his mixing board. Only by the last notes does the piece come to life and does the bass finally make an appearance. Odd. In any case, to my ears Kuchar's interpretation seems far too underpowered to be of much value to the seasoned listener.

In the Romeo and Juliet Fantasy Overture Kuchar and his ensemble come off a little better, although the music doesn't evoke the all-out sensuality of some of the finest competitors in the field. Then, the "Dance of the Tumblers" from The Snow Maiden appears more loud and boisterous than anything else, but that's probably as much the composer's fault, so I can't blame Kuchar. After that, the March Slave makes an appearance, but it, too, comes in sound so soft and round it seems almost lifeless.

Finally, the 1812 closes the show, and, lo and behold, it's passably good. Maybe the audio engineers were saving the best for last. The sound here appears closer and more robust than on the preceding pieces; the bass, while still not very deep, at least makes a small impression; the dynamics increase slightly; the pacing picks up, also slightly; and the music ends decently enough with real cannon shots. Unfortunately, the cannons are not particularly forceful, and the accompanying bells are so muffled they sound more like crowd noise than musical instruments, but that's neither here nor there.

Overall, one can do better than this Naxos release, even at budget price.