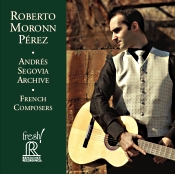 This is the second album in a series of Reference Recordings Fresh! albums devoted to music dedicated to or commissioned by the virtuoso Spanish guitarist Andres Segovia, this time the program presenting the music of mostly French composers performed by guitarist Roberto Moronn Perez. The disc contains selections from seven French composers and one Belgian, each having written music in a Spanish style. Edizione Musicale Bèrben originally published the music as the Segovia Archive Series, and Reference Recordings offer them on disc as a part of their subsidiary Fresh! label.

According to RR's notes, the "genesis for this unique project is a collection of pieces recovered in May 2001 at Segovia's home. Spanish-born Perez researched these newly recovered works and found some pieces that had never been recorded, and those that had were handicapped by poor visibility in the marketplace and limited distribution. This realization sparked the thought that here was an opportunity: a series of recordings organized around the nationalities of the composers in the Segovia Archive."

Anyway, just as other French composers have evoked the spirit of Spain--Ravel, for instance, Chabrier, Massenet--so do the composers represented here. More important, Perez does each man and his work fair justice. He plays with flair but also with nuance and subtlety. His guitar opens up each work and expands it seemingly beyond the limits of a single instrument. Although you won't find any (or if you are a dedicated classical guitar fan, many) familiar pieces here, if you are like me you will find each work entertaining, touching, or enlivening as the case may be.

Composer Raymond Petit (1893-1976) and his little Sicilienne opens the program. Its original title was Andantino, but a reviewer at the time of its première described it as a gentle, melancholic Sicilienne. So, of course, that's the way Perez plays it, hardly the usual blockbuster that often opens a show but certainly affecting. This one is slow, sensuous, and sweet.

Then, there is Henri Martelli (1895-1980) and his Quatre Pieces. These four selections appear more rhythmically varied than the first item, with rich harmonies nicely exploited by Perez. The second of the four movements takes extreme dexterity to pull off, and Perez is up to the job, giving us a fine display of his guitar mastery.

Pierre de Breville (1861-1949) and his Fantaisie is next. It derives its title from its changeable character, which surprises one at every turn. It's odd that this piece gets so little play; it's quite appealing, especially in Perez's capable hands.

Henri Collet ((1885-1951) and Briviesca follows. This is, for me, the first selection on the disc that sounds distinctly Spanish, with echoes of a Castilian landscape. Perez serves up the melodies with a warm, sensitive passion, making it one of the loveliest pieces on the disc.

After that is a three-movement Suite by Raymond Moulaert ((1875-1962). Moulaert is the only non French-born composer on the disc, Moulaert born, raised, and educated in Belgium. Close enough, I guess. His Suite is altogether the longest work on the program, yet thanks to Perez's insightful performance it seems rather short. Maybe it just went by quickly because I was enjoying it so much. This is also, interestingly enough, the most intense piece on the program. 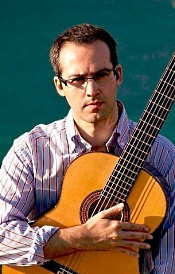 Another three-movement work comes next, this one called Cuadros (Scenes d'Espagne) by Raoul Laparra ((1876-1943). The second and third of these "pictures" are the most colorful and enjoyable, with tunes directly aimed at pleasing a mass audience. Perez seems to be having fun with them, even if the music appears more derivative than that of Laparra's fellows on album.

The program closes with two brief selections: Spiritual by Pierre-Octave Ferroud (1900-1936) and Segovia by Ida Presti (1924-1967). The Ferroud number seemed more overtly "modern" to me than the rest of the music on the disc, which seemed more traditional and Romantic by comparison. In a booklet note, Perez says he isn't sure Ferroud's piece measured up to Segovia's taste, and that might explain why guitarists today don't play it much. Ms. Presti, on the other hand, was a guitarist herself and a favorite of Segovia. Perez imbues her musical portrait of the master guitarist with much intricate personality. Overall, it's another gentle, nuanced piece of music played with rich, strong feeling and sensitive shading, making a lovely ending to the album.

Audio engineer John Taylor produced, recorded, and edited the music at Holy Trinity Church, Weston, Hertfordshire, UK in 2013, with Grammy award-winning engineer Keith O. Johnson doing the final mastering. The guitar is fairly close yet never in-the-face close; just close enough to provide ample detail and focus. The sound comes across as well defined, with a moderately quick transient response on the plucked strings, yet warm and natural, with a realistic decay time thanks to the ambient bloom of the venue.