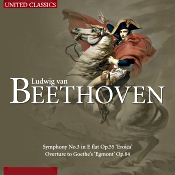 Sir Colin Davis (1827-2013) had already made several fine recordings of Beethoven symphonies before recording the complete cycle with the Staatskapelle Dresden for Philips in 1995. Of the set, this recording of the Third Symphony got some of the best notices, yet it didn't appear to remain in the catalogue for long. I can only surmise that this situation might have come about in part because Philips was at the time thinking about throwing in the towel and in another part because Davis's reading sounds somewhat deliberate, and perhaps some listeners even considered it old-fashioned. Nevertheless, it's quite a good interpretation in its own right and worth a listen, so it's no surprise that United Classics would want to reissue it.

Anyway, the Symphony No. 3 "Eroica," Op. 55 by Ludwig van Beethoven (1770-1827) premiered in 1805, ushering in something of a new beginning in the development of symphonic structure. It was so new, in fact, that Beethoven's orchestration and arrangement still prompt discussion among critics today about what it all means. My personal favorite recordings of the symphony include those by Otto Klemperer (EMI), Sir John Barbirolli (Dutton Lab), Karl Bohm (DG), Leonard Bernstein (Sony), Philippe Herreweghe (PentaTone), David Zinman (Arte Nova), Paavo Jarvi (Sony), Klaus Tennstedt (EMI), and even a cheerfully eccentric one from Hermann Scherchen (HDTT). While Davis's treatment doesn't strike me as being as colorful or as distinctively characterized as these, it is remarkably elegant and graceful, and it certainly should be an interpretation the dedicated Beethoven fan might investigate.

Don't expect a hypertense or superfast interpretation from Davis along the lines of a Norrington, Zinman, or Scherchen. Davis is closer to the readings of older maestros like Bohm, Klemperer, and Jochum. Yet Davis's rendering comes with its own charms, not the least of which is the way he so affectionately brings out the rhythms and harmonies of the first movement Allegro con brio. There is a genuine vigor and vivacity here, without his getting all hectic and crazy on us. Moreover, there is plenty of heroism and nobility involved, a sense that one is listening to pure, refined elegance rather than just hurried notes or manufactured excitement. I still wouldn't say Davis's rendition of things is among my absolute favorites (it hasn't the granite grandeur of a Klemperer, for instance), but it does come off pretty well.

It is in the second-movement funeral march, however, that conductors have to prove their worth in the Third. Here, Davis is very solemn, indeed, and trying to keep our attention for over a quarter of an hour proves a strain even on his skills. Still, he maintains a goodly and varied pace, creates a calm and quiet intensity, and manages at least not to put one to sleep.

While Davis's way with the Scherzo is not quite as lively as some I've heard, he does pull it into the sphere of the earlier movements, so it doesn't come as a complete shock to the system. Under Davis, the movement has a kind of regal vitality that is quite in line with the symphony as a whole. 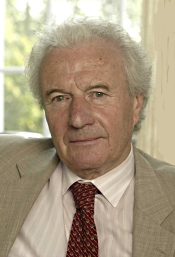 Then, we get a concluding movement of expansive weight, bringing this first of Beethoven's truly great symphonies to an impressive close. Again, expect no delirious exercise in thrills and excitement, but a regal and triumphant summing up of the piece, with the finishing Presto working up a notable head of steam.

As a coupling, Davis offers the overture to Egmont. Although I never felt the same enthusiasm listening to Davis's interpretation that I feel with Szell and the Vienna Philharmonic, Davis nevertheless provides a telling compromise of tragedy and heroics, with perhaps the balance favoring the former.

Throughout the music, the Dresden State Orchestra plays wonderfully, reminding me once again why I consider it one of the finest orchestras in the world. The deep, rich, flawless sonority of the ensemble finds a match among few others in my book, maybe the Concertgebouw, Gewandhaus, and Berlin orchestras. They are always a pleasure to hear.

Philips originally recorded the disc in 1995, releasing it as a single disc and in a complete set of Beethoven symphonies. United Classics re-released the album in 2014 (and Newton Classics re-released the entire cycle several years earlier). What you'll get sonically is one of the finest-sounding Beethoven Thirds around. The midrange is remarkably clean, with a mildly pleasant ambient bloom. Dynamics are on a par with the best--very strong, very quick. Depth of field is not exceptional but still realistic. Stereo spread is wide. Bass and treble extend out well in both directions. In sum, the whole affair is remarkably natural and lifelike, and most enjoyable.