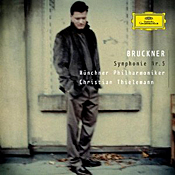 Bruckner’s Fifth Symphony is not exactly the most manageable work in the classical orchestral repertoire. It is so big and unwieldy that no one wanted to play it in Bruckner’s own time, and not even the composer heard his original 1878 version in his lifetime. After conductors performed many truncated editions, it was only in 1935 that the public finally got to hear the original version. The poor thing is still something of a slow starter and among the least-recorded of the composer’s nine symphonies.

Anyway, Christian Thielemann’s way with it makes it seem even longer by his playing it more slowly than usual. Certainly, this brings out all the lofty, dramatic qualities of music, making it sound far more like Wagner than Mahler or Richard Strauss, fellows whose music critics sometimes compare to Bruckner’s. Indeed, under Thielemann the symphony times out at almost eighty-three minutes, yet, surprisingly, it fits on a single CD. The wonders of modern compression, I guess. 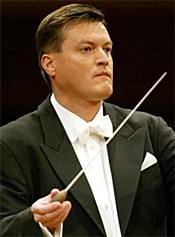 The first two movements alone take up some forty-two minutes, and if you can get through them (especially the long, ambiguous first movement), the third and fourth movements are a delight. After such deep, dark, heavy, and solemn opening movements, the Scherzo and Finale are breaths of fresh air. Thielemann’s strong suit is his ability to sustain the listener’s attention through most of the first half, leaving the second half to Bruckner. Thielemann maintains a firm concentration and a secure passion throughout, no matter how slow things get.

I wouldn’t say this displaces my first two choices in the work, however. I still think Sinopoli’s DG recording sounds more strongly characterized and Klemperer’s EMI recording the better sonically. DG recorded Thielemann’s performance live (as they did Sinopoli’s), and the result has a certain dull veneer covering it, although the engineers miked it reasonably close up. By comparison, the Klemperer sonics are much clearer and more open. The downside to Klemperer is that he’s more wayward and quixotic, and Thielemann is more straightforward and consistent. Maybe Sinopoli represents the best of both worlds.