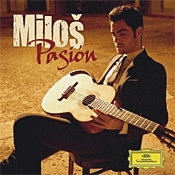 Following the successful debut release of his album Mediteranno in 2011, Montenegrin guitarist Milos Karadoglic gives us much of the same in a program of Latin-American music, Pasion, from 2012. By “much of the same” I mean he provides skillful renditions of popular classical works, this time with perhaps a shade more panache and bravura than before.

Mr. Karadoglic goes by the single name “Milos,” and I hope it does not bespeak any vanity or pretentiousness on his part. I rather suspect that as he is a movie-star handsome young man, the name is merely another component in DG’s promotion of him, like the eight or so pictures of him we get on the disc cover, on the back, and in the booklet insert. When you’ve got a hot item, you go with it.

Anyway, Milos begins this newest album with Astor Piazzolla’s Libertango, with the Studioorchester der Europaischen FilmPhilarmonie in accompaniment. It’s a brief piece, with a surging forward pulse.  I suppose it exemplifies the disc’s title, being fiery and passionate and all. It works pretty well as a curtain raiser, although I found the sound a little too big, close, and soft for my taste.

More music in a like vein follows, Jorge Morel’s Danza brazilera more subtle and subdued, with Milos’s playing even more nuanced. It’s quite lovely. Then it’s on to Heitor Villa-Lobos’s Prelude No. 1 in E minor, a popular tune that sounds reminiscent of Anton Karas’s Third Man theme but predates it by a decade. The Preludes are popular guitar pieces, and Milos does this one up pretty well.

And so it goes, with one of my favorite tangos getting a revved-up treatment from Milos and the orchestra: Carlos Gardel’s Por una cabeza. Any number of movies have featured it in their soundtrack, and here Milos emphasizes perhaps a bit too much the lilt of the dance rhythms. The music doesn’t really need further embellishment. Wait, I think I just saw Jamie Lee and Big Arnold dancing off the floor. Or was it Al Pacino? 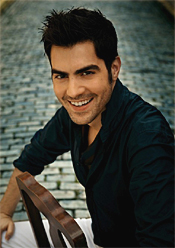 By the middle of the program with Jorge Cardoso’s Milonga and Agustin Barrios Mongore’s Un sueno en la floresta, things take a turn toward the lyrical, the latter item among the most appealing things on the album with its extensive tremolo, that tremulous or vibrating effect that can sometimes sound corny but here works considerably well. The program continues with pieces by Leo Brouwer, Osvaldo Farres, Isaias Savio, Manuel Ponce, and Gerardo Matos Rodriguez.

When Milos performs live, he says “it's close to dreaming for me--afterwards I don't remember much about it. I just remember feeling very well, with a high level of energy and emotion.” That sentiment seems to describe his studio music making here as well. Classical guitar fanciers will enjoy another disc to add to their collection, and while they may find Milos’s performances a tad too flamboyant, there’s no denying they’re fun. Moreover, the Latin-American theme is intriguing.

DG recorded the music at St. Mary’s Church, Chilham, England, and b-sharp Studio, Berlin, Germany, in 2011-2012. The guitar is front and center, rather warm and ultrasmooth to match the playing. I would have preferred a little more bite to the strings. The orchestral accompaniment sounds slightly recessed but displays a strong dynamic thrust when necessary. This is slick, round, refined sound, light on transparency and heavy on atmosphere.