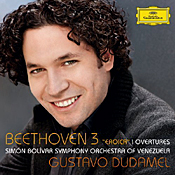 Three things surprised me about this recording of the Beethoven Third Symphony from Gustavo Dudamel. First, the boy wonder is no longer as young as I remembered him, being in his early thirties at the time he made this disc. Second, the Simon Bolivar Symphony Orchestra of Venezuela has dropped the “Youth” from its title, apparently because the average age of its members has grown along with Dudamel’s. And, third, the youthful nervous energy I had heard Dudamel produce in earlier performances seems now replaced by a more concentrated, more focused joy and excitement. I liked this new rendition of the Third.

Beethoven completed his Symphony No. 3 “Eroica,” Op. 55, in 1804 and premiered it in 1805, observing something of a new beginning in the development of symphonic structure and still prompting endless discussions among critics about what it all means. Dudamel gives us a riveting, often scintillating interpretation of a warhorse that has already seen terrific readings from just about everyone. My own favorites include those by Otto Klemperer (EMI), Sir John Barbirolli (Dutton Lab), Karl Bohm (DG), Leonard Bernstein (Sony), Philippe Herreweghe (PentaTone), David Zinman (Arte Nova), Paavo Jarvi (Sony), Klaus Tennstedt (EMI), and even a cheerfully eccentric one from Hermann Scherchen (HDTT). Dudamel’s reading may not be quite as individual as these, but it’s in the running.

Without going all crazy on us with ultrafast speeds, Dudamel creates a vibrant yet appropriately grand, imposing vision in the opening Allegro con brio. Although the movement can occasionally exhibit some ferocious passages, under Dudamel it is consistently steady...and heady. The orchestra, maturing under Dudamel’s leadership over the years, sounds wonderfully nuanced, enthusiastic, and controlled, attacking each note with conviction and assurance.

The second-movement funeral march, sometimes the bane of conductors, doesn’t drag as much under Dudamel as it has under others, even though Dudamel takes it at a properly slow, funereal gait. It sounds dignified, almost classical in structure, with well-thought-out contrasts. Still, it’s a long time to maintain a steady tension, and not even Dudamel is entirely successful.

The conductor’s reading of the third movement Scherzo is fiery without being breathless or tiring. What it may lack in pure adrenaline rush it makes up for in its well-meaning spirit. Nevertheless, it was the one moment in the symphony that seemed ordinary to me. 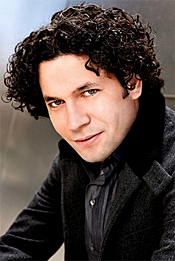 Borrowing a tune from his Prometheus ballet, Beethoven wrote a finale that at once appears lightweight and gloriously triumphant. The conductor will have us hear the light, lyrical elements but emphasizes the more-weighty triumph above all. Dudamel’s Beethoven Third is perhaps not so unusually memorable as other renditions, yet it is a sensible, sincere, and distinguished account.

Lively realizations of Beethoven’s overtures to The Creatures of Prometheus and Egmont make a strong and entirely suitable coupling. Egmont is especially eloquent, forceful, and impressive.

The sound, recorded in Caracas, Centro de Accion Social por la Musica (Sala Simon Bolivar), in early 2012, is full, warm, and rich, never entirely transparent but nicely dynamic. There is a minor veiling of the midrange, thanks to a mild resonance, but it imparts to the music a realistic sense of hall ambience. While bass and treble extension could be a tad better, I’m not really complaining. The sonics are quite smooth and soothing and add considerably to one’s enjoyment of the music.