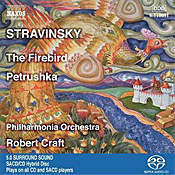 The benefits of this issue are that you get both the Firebird and Petrushka ballets complete, some seventy-nine minutes’ worth of music, on a single, dual-layered hybrid stereo/multichannel SACD, playable in both two-channel stereo and five-channel surround sound. And all at a most-reasonable mid price. Or at least it was available until Naxos apparently decided to withdraw the SACD and go only with the two-channel CD. Still, I’m sure the CD is equally fine.

Moreover, the Firebird is a world-première recording of Stravinsky’s original 1910 version as never heard before. Robert Craft, the distinguished American conductor who was friends with and worked alongside of Stravinsky during the last years of the composer’s life, leads the equally prestigious Philharmonia Orchestra. Craft tells us in an accompanying booklet insert that “this is the first recording of the complete original version of Stravinsky’s most popular work.... Among the many differences between the present recording and its predecessors is the restoration of two long, valveless trumpets on stage, each playing a single note standing out above the entire orchestra.” The MusicMasters label originally recorded Firebird in 1996 and Petruchka a year later, both of them in multichannel and both of them eventually showing up on the present Naxos disc. 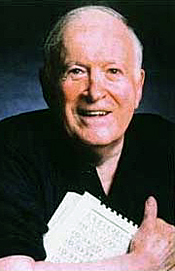 All well and good, plus we get a pair of nicely executed performances of both ballets. The Firebird, especially, comes across as both ardent and comforting. My guess is that Craft was attempting to create the ethereal quality of a fairy tale here, which works reasonably well. However, the rambunctious entrance of Kastchei doesn’t seem to generate as much excitement as I would have liked. Maybe my listening was a tad unfair, though, because by coincidence, at about the same time I heard these recordings, I had just listened again to Mercury’s reissue of Antal Dorati’s celebrated 1959 recording of the Firebird,  also on a multichannel SACD and for only a few dollars more than this disc. The difference in sheer vitality seemed astounding to me, Dorati stirring the blood and Craft simply competent.

The sound of the two ballets on this Naxos SACD hybrid probably appears slightly different only because Stravinsky orchestrated the two pieces differently. The Firebird seems a bit warmer, cushier, and more lavish than Petrushka since the composer scored it for more instruments. Otherwise, both works display a wide stereo spread, an excellent orchestral depth, and a prodigious bass drum. However, played in two-channel stereo as I listened to them, they seemed a touch too resonant, with a few too many reflections that might have come off better in multichannel. The result is a somewhat reverberant sound that does not provide as much inner detail as, say, the aforementioned Mercury recording, which is in a class by itself sonically and interpretively.