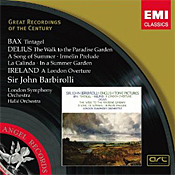 I mean, who would rather having conducting English pastoral music than Sir John Barbirolli? Well, maybe Sir Thomas Beecham or Sir Adrian Boult, but close enough. Barbirolli was born in London of an Italian father and a French mother, but he was an Englishman through and through. Like Beecham and Boult, English music was in his blood and bones. One can hear it no better expressed than in this collection of short English tone poems, presented by EMI on one of their “Great Recordings of the Century” albums.

The program begins and ends with evocations of England, first up being Arnold Bax’s portrait of the fifth-century coast of Cornwall, “Tintagel,” the legendary place of King Arthur’s birth. The final piece is John Ireland’s picture of twentieth-century downtown London, “A London Overture.” The two works couldn’t be more different, but they are excellent, contrasting bookends for the collection. “Tintagel” is, of course, the more Romantic, in both senses--fanciful and adventurous yet sensual and passionate. The thrusting waves against the rocky shores are as metaphorical as they are literal.  Barbirolli deals with it exquisitely, at least the equal of Boult’s celebrated version on Lyrita. “A London Overture” is bustling, noisy, and crowded with the sounds of the city. 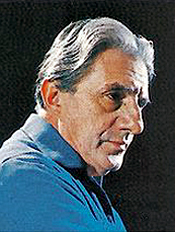 Next up are five pieces by Frederick Delius, the first three done by Barbirolli and the London Symphony Orchestra from 1965-66 and the last two by Barbirolli’s and the Halle Orchestra done several years later. The nice thing is that if you have Beecham’s collection of Delius’s music on EMI’s “Great Recordings of the Century” series, the present disc duplicates only one of the pieces, the “Irmelin Prelude.” The other four are “The Walk to the Paradise Garden,” “A Song of Summer,” “In a Summer Garden,” and the totally delightful “La Catinda.” Wonderful material.

The sound is splendid throughout, with a slight nod, perhaps, to the later Halle recordings. The sonics are very wide spread, warm, and open, with plenty of orchestral depth and no holes anywhere. This is quite a good disc in every way.