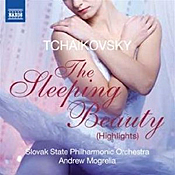 I had never heard Andrew Mogrelia’s complete recording of Tchaikovsky’s Sleeping Beauty ballet, which he made some two decades ago, but I had heard many good things about it. So it was with some hopeful anticipation that I looked forward to hearing these highlights from the complete set. At well over seventy-five minutes of excerpts, this highlights disc supplies the bulk of the work’s most-memorable music, and it did not disappoint me.

But why an excerpts album when the two-disc is only a few dollars more? Although many of Tchaikovsky’s fans regard The Sleeping Beauty as the best of the composer’s three big ballets, I have always found it has less to offer than Swan Lake or The Nutcracker, with some of the music sounding redundant to me. Thus, a highlights disc seems ideal for people like me.

Anyway, you remember the story, if only from the familiar Disney cartoon. An offensive and offended evil fairy places a spell upon a beautiful princess, condemning her eventually to prick her finger and fall into a deep sleep forever. A more benevolent fairy modifies the spell, allowing her to awaken in a hundred years with a Prince’s kiss. Various other fairy-tale characters show up later in the story, until it all ends happily.

In the Introduction, Prologue, and preliminary scenes, which seem to go on forever, Maestro Mogrelia does his best to provide ample drive and forward thrust, which he does nicely. There is a minor relentlessness to Tchaikovsky’s music, though, which not even Mogrelia’s vibrant conducting can tame entirely.

By the time Tchaikovsky's more sweetly melodic tunes arrive, Mogrelia is ready for them with an elegant, graceful, rhapsodic flourish. Moreover, he well represents the fairies in the story early on, both the good ones and the wicked Carabosse.

When the three major acts of the ballet finally arrive with the entrance of the famous waltz, we’ve got a pretty good idea of the kind of performance we’re in for. Mogrelia provides all the vitality, beauty, and exuberance one could want, if not always all the magic of the fairy tale. 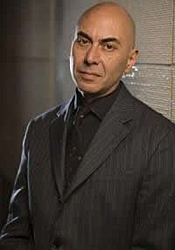 The “however”: Given the weak state of the economy when Naxos released this highlights disc in 2012, most of the major record companies (EMI, DG, Decca, Sony) were producing little or no orchestral music, so one couldn’t find a lot of newer recordings of The Sleeping Beauty available. Still, one could find several outstanding alternative older recordings, even though mostly in complete sets. Chief among them is that of Andre Previn and the London Symphony (EMI), which I find an even more enchanting account of the score than Mogrelia’s and in better sound. Then, too, there are renditions by Vladimir Ashkenazy and Royal Philharmonic (Decca), Mikhail Pletnev and the Russian National Orchestra (DG), Antal Dorati and the Concertgebouw Orchestra (Philips), Gennady Rozhdestvensky and the BBC Symphony (BBC), among others to consider. Which is not to take anything away from Mogrelia, whose complete and highlights editions are very fine choices, indeed.

Recorded at the House of Arts, Kosice, Slovakia in 1991, the sound is typical of what one usually hears from a good Naxos product. On the plus side, it’s smooth, warm, mellow, lightly resonant, and easy on the ear. On the minus side, the midrange is not especially transparent, nor is the orchestral breadth or depth particularly impressive. In addition, the upper midrange can get a tad fierce in the loudest passages. Nevertheless, as I say, it’s a pleasant enough sound, and with a reasonably strong dynamic range and impact, it keeps one involved.