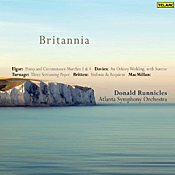 The sedate part starts and ends the program, Sir Edward Elgar’s First and Fourth Pomp and Circumstance Marches from 1901-1907 (with the Fourth coming first). There’s nothing sedate about the way Runnicles plays them, though. He goes at them with gusto. Probably too much gusto for my taste, as his tempos suggest something other than marches and tend to diminish the grandeur and ceremony of the works in favor of pure excitement.

Following the first Elgar piece is Sir Peter Maxwell Davies’s An Orkney Wedding, with Sunrise from 1984, and it is probably the best thing Runnicles does on the disc. Davies himself described the music as “a picture postcard,” and that’s how the conductor approaches it, as a tone painting. It’s really fun, lively, and picturesque.

The next couple of things, frankly, I disliked. But that’s just me, and I’m sure it has nothing to do with Runnicles’s readings of the music. Mark-Anthony Turnage’s Three Screaming Popes and James MacMillan’s Britannia are simply too noisy for me. They seem typical of mid-to-late twentieth-century music that dispenses with anything approaching traditional melodies to create sonic impressions that jar the senses rather than soothe them. I’m old fashioned, I admit; I don’t want my senses jarred. Turnage’s work has elements of jazz infused throughout that are sort of fun, but, overall, I don’t think I’d want to revisit it. MacMillan’s Britannia is a bit more conventional, playing out a little like Charles Ives in that the composer sneaks in bits and pieces of other works--Arne and Elgar among them--to create a broad, modern canvas of British orchestral music. 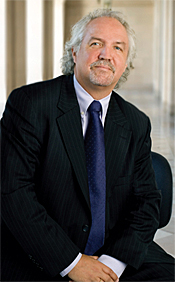 Then, just before the final Elgar march, Runnicles gives us Benjamin Britten’s Sinfonia de Requiem from 1939. Britten wrote it on a commission from the Japanese government just before World War II, but the Japanese were dissatisfied with the Catholic references in it and never performed it. Britten was happy to take the money and run. Anyway, Runnicles offers it up in a most dramatic fashion, with all the power, intimacy, and proper repose it requires.

The Telarc engineers do a fine job on their end as well, capturing a good stereo spread, good imagery, good depth, and good, taut bass. However, in the hybrid SACD’s regular two-channel mode, playable on any standard CD or DVD player, there is a touch of veiling, a kind of mist. In the disc’s two-channel SACD mode played back on an SACD player, the sound clears up better and appears a tad more dynamic. So if you have an SACD player, more power to you.