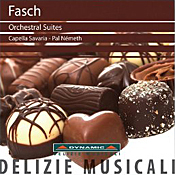 Who?  German violinist, composer, and kapellmeister Johann Friedrich Fasch (1688-1758) was another of those artists that audiences and critics respected during his lifetime but whose music soon faded into obscurity after his death. Remember, there were no phonograph records and no radio or television to keep the musical arts alive, and with changing attitudes in music, changing instruments, and changing orchestral sizes, older ideas often died or got lost along with their composers. Critics of Fasch’s day thought so much of the man, they would often hold his music in the same regard as that of Bach and Telemann. The present disc contains three of his orchestral compositions representative of his work.

The Suite in F major, a six-movement suite, starts with a typically French-sounding overture. Played by the Capella Savaria, a Hungarian period-instruments ensemble under the directorship of Pal Nemeth, the suite displays a pleasing and lively spirit. After the overture, there continue the usual dances and interludes: airs, bourrées, gavottes, plaisanteries (amusing pleasantries), and, of course, minuets, which end each suite.

For me, the most-delightful work on the program is the little Suite in D major, also in six movements. It has a most-regal and stately overture that is quite fetching. Nemeth then infuses the rest of the suite with an equal charm. The music is light and flowing, never raucous, edgy, or annoying in any way, the airs particularly lyrical and sweet, especially the second one. 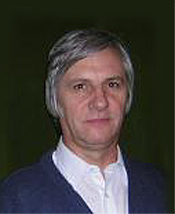 The disc concludes with the longest of the selections, the Suite in A minor, containing ten movements. If one is listening to the album straight through, yet another of these sets may be a bit much, but taken one suite at a time, they can be quite satisfying. Anyhow, the A minor Suite starts in a more serious fashion than the others, finally giving way to a breezier, rhythmic pulse and more courtly moods. As before, the Capella Savaria play with vigor and finesse, and Maestro Nemeth’s direction appears impeccable.

Recorded at Saleszianer Theater, Szombathely, Hungary in 1999 and re-released by the Dynamic label in 2012, the sound is warmly and spaciously vibrant. The theater exhibits a rich, resplendent resonance, and together with the engineers capturing a good left-to-right and front-to-back image, the sonics are as lifelike as possible. The idea here was not to reproduce the most-transparent midrange but the most-realistic overall impression.  In this regard, one must count the recording a success.

Email ThisBlogThis!Share to TwitterShare to FacebookShare to Pinterest
Labels: Fasch