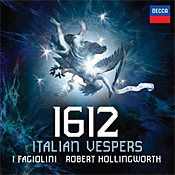 Titles are everything, and I suppose this one, Vespers 1612 (or 1612 Vespers if we read it literally), needs a little explaining. The Vespers part is fairly self-explanatory; at least, for those folks who know what Vespers are in terms of music. Just as a reminder, Vespers refer to a late-afternoon or evening religious service. In the Roman Catholic Church, they form a part of the service evenings and often held as a public ceremony on Sundays and holy days, most often containing evensong, a form of worship that’s sung.

OK, the album contains vesper evensong. But what’s the 1612 all about? For one thing, the year 1612 marked the death of the great Italian composer of vocal and instrumental music Giovanni Gabrieli, very influential early on in the musical development of the Baroque age. In addition, it marked the first public celebration of the Venetian naval victory at Lepanto in 1571, a celebration that went on for over 200 years after the incident as the festival called The Feast of Our Lady of the Most Holy Rosary. (The Venetians figured Mary had a significant influence on the outcome of the battle and, thus, dedicated the festivities and devotions to her.)

Maestro Robert Hollingworth and his award-winning vocal ensemble I Fagiolini have attempted in this album to reconstruct what at least some of the program for that initial celebration might have been like. What we get in the reconstruction are world-premiere recordings of Vesper Psalms by Lodovico Viadana, a composer who helped usher in changes from the Renaissance to the Baroque period; the 28-voice Magnificat by Gabrieli; and a seeming host of other pieces from the era of multi-choir music.

I mean, if you called the album Baroque Vespers, Vol. IV, or, heaven forbid, just Baroque Vocal Music, Vol. CCCXVII, it wouldn’t have quite the same ring, would it? Anyway, the program begins with several short pieces by Viadana (c. 1560-1627), including his setting for Psalm 109 and four others. We notice quickly that Hollingworth and his team have varied the selections considerably, so that we get large groups of singers followed by more-intimate arrangements for smaller groups, even individual voices. They are all lovely and display a wide range of styles. 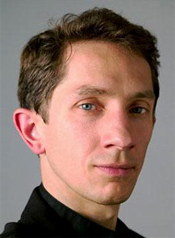 Bartolomo Barbarino (1568-c. 1617) next contributes Exaudi, Deus, with its stirring cornett solo. There follow more psalms and multi-choir pieces by Viadana, Palestrina, Monteverdi, and Gabrieli, some accompanied, some not, some with soloists, some not.

These all lead up to the centerpiece of the program, Gabrieli’s Magnificat a20, a28. Con il sicut locutus. In ecco, one of a pair of seven-choir arrangements that survive incomplete. Hugh Keyte supplied the reconstruction in this first-time recording. The battle music that constitutes the middle portion comes as a welcome surprise.

The singing itself sounds precisely articulated, yet not without adequate expression. The instrumental and vocal accompaniment, augmented by the English Cornett and Sackbut Ensemble and De Profundis (Cambridge), is light enough never to intrude upon the primary voices, and that includes the unobtrusive and almost ever-present organ. For anyone interested in the early Baroque period (or for those who are not, who knows), these multifaceted works with their breadth of expression provide a uniquely moving, rewarding, and often spectacular listening experience. More of an event, actually.

The sound is quite agreeable, recorded for Decca at St. John’s, Upper Norwood, London, in 2012. The engineers capture a fine sense of occasion, with a wide stage, and especially good depth and hall resonance. Occasionally, one notices a very slightly hard, bright, glassy response from closer sounds, but it is not enough to be a problem. In fact, these qualities often provide a more sharply etched definition for the sonics. As it is, we get rich, resplendent voices set in an environment with just the right amount of reverberation to simulate the live space of St. John’s in one’s living room. In short, it makes pleasant listening.

Email ThisBlogThis!Share to TwitterShare to FacebookShare to Pinterest
Labels: Vespers