Music for the Berlin Court of Friedrich the Great (CD review) 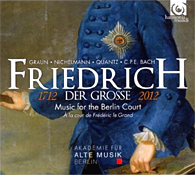 According to the back cover of this Harmonia Mundi release, “The year 2012 marks the tercentenary of the birth of Frederick the Great, whose political and military glory has often relegated his musical talent to the status of a mere hobby. But Frederick II was not only the key personality of Berlin musical life for the whole 18th century--as is shown by the work of the composers presented on this CD, all of whom worked at his court at some point in their careers--but also an excellent flautist who left posterity a number of fine flute sonatas from his own pen.”

The disc contains five works from four composers, including Friedrich II, king of Prussia from 1740-1786. They amply display the creative breadth of the court’s musicians.

Things begin with Johann Gottlieb Graun (1703-1771) and his Overture und Allegro in D minor. Like the other selections on the disc, the music is not particularly memorable, but it is noteworthy for its lively style, and the Akademie fur Alte Musik Berlin, the award-winning chamber orchestra that has devoted itself to the study and performance of ancient music for the past thirty or more years, play the music with an undisguised enthusiasm. These works from Graun provide an exhilarating start to the program.

After that, we get the Concerto per il Cembalo concertante in C minor by Christoph Nichelmann (1717-1762), a typical three-movement work that features some invigorating harpsichord playing in the opening Allegro. If the ensemble tend to rush things a tad, I suppose it’s their prerogative; I’d have liked them to slow it down a trifle. As Nichelmann also wrote songs, one can understand why his central Adagio sounds so rhapsodic; it seems like something from the Romantic period rather than a century earlier. A quick little Presto concludes the piece.

Then we come to one of the many works by Friedrich II (1712-1786) himself, the Flute Sonata in C minor, Nr.190. The king was an accomplished flutist and composed over a hundred sonatas for the instrument. This sonata’s three movements follow the outline slow, moderately fast, and faster. The music is sweet, the solo flute and fortepiano gliding along effortlessly. 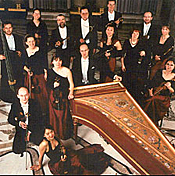 Next, we are back to Graun, this time with his Concerto per il Viola da Gamba concertata in A minor. I enjoyed this piece more than Graun’s earlier one on the disc, perhaps because of the lovely sonority of the instrument. The cello would later supplant the viola da gamba in modern orchestras, but it certainly has a plaintively distinctive sound. The work itself is one of the most pleasurable on the program.

The album closes with a piece by the most-famous composer on the disc, Carl Philipp Emanuel Bach (1714-1788), his Sinfonie Nr. 1 in D major. This was an early example of the then-developing symphony form, and as such it sounds more mature, better elaborated, than the concertos that precede it. The ensemble is no longer merely supporting a solo instrument but creating a variety of contrasting sounds of its own. We can see where it’s going and how the symphony form would come into its own with a few more decades. The Akademie play it with great zest, and even though they again seem to take things at a rather heady pace for my liking, they maintain a refined dignity in the process.

Recorded at Teldec Studios, Berlin, in 2011, the sound is very slightly on the hard, bright, metallic side; yet it displays excellent depth and clarity, too. The imaging is precise, dynamics are more than adequate, and while the frequency range doesn’t appear too extended, it’s sufficient for the music. There is also a good, rich tone from the harpsichord that comes as a welcome addition.