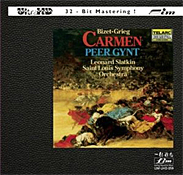 There is little doubt that for the past hundred-odd years people have found the opera Carmen and the suites derived from it charming. Yet French composer Georges Bizet (1838-1875) would never live to see exactly how popular his final completed opera would become, the work seeing a poor reception in the year of the composer’s early death. Sometimes, life is unfair.

Bizet set the opera in Seville, Spain, during the early nineteenth century, the narrative involving a beautiful and tempestuous Gypsy girl, Carmen, who lavishes her affections on a young but naive soldier, Don Jose. He becomes so enamoured with Carmen, he spurns his former lover, deserts his regiment, and joins Carmen and a crew of smugglers. When Carmen subsequently rejects him and takes up with a bullfighter, Don Jose becomes so enraged with jealousy that he murders her. How’s that for melodrama! Here, on this 1979 Telarc release remastered by LIM, we get two orchestral suites from the opera, containing most of the famous music.

LIM (Lasting Impression Music), if you remember, is an affiliate label of FIM (First Impression Music), a company that for the better part of a decade has been remastering classic older material, using the original master tapes and state-of-the-art processing. These days, they are using a new Ultra High Definition technology utilizing 32-bit mastering. They are also working with a number of recordings from the Telarc catalogue, Telarc being one of the companies that pioneered the digital revolution in recording.

Anyway, Telarc Records, conductor Leonard Slatkin, and the St. Louis Symphony Orchestra chose to do two orchestral suites from Carmen, the first containing six items, the second two. Suite No. 1 contains the Prelude to Act I, Aragonaise (Prelude to Act II), Intermezzo (Prelude to Act III), Seguidilla, Les Dragoons d’Alcala, and Les Toreadors (Introduction to Act I). Suite No. 2 contains only two numbers, La Garde Montante and Danse Boheme, but they are individually longer than those of the first suite.

In Slatkin’s readings we get sturdy, straightforward interpretations of the score, without too much characterization from the conductor. If you want more color in these suites, I would suggest you look to Sir Thomas Beecham (EMI), Paul Paray (Mercury), Leopold Stokowski (Sony), or Herbert von Karajan (DG). While these are much older recordings than the Telarc, they still sound pretty good, and the realizations are more creative. With these Slatkin renderings, it’s the sound that’s king.

Still, Slatkin’s version of the Intermezzo does come across beautifully, and Les Toreadors, which Slatkin takes at a rapid pace, is wonderfully exciting, especially with Telarc’s big bass drum pounding away in the background. Nevertheless, it hasn’t quite the swagger we hear from the aforementioned conductors. The Suite No. 2 has fewer but longer entries, as I say, and Slatkin gives them a fair amount of spontaneity, closing the show with a huge burst of energy. 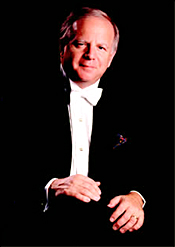 Coupled with the Bizet sets is a six-movement suite from Peer Gynt by Edvard Grieg (1843-1907), taken from the incidental music Grieg wrote in 1875 to accompany Henrik Ibsen’s play of the same name. I liked these selections from Slatkin rather more than I did the Bizet because there seems to be more life, more vitality, to them. Here, I found a more convincing depiction of the events in the play. The “however” is that recordings from Oivin Fjeldstad (Decca) and Raymond Leppard (Philips) can be even more imaginative, and while they don’t sound as good as these from Telarc/LIM, they are a lot cheaper.

Telarc’s producer, Robert Woods, and engineer Jack Renner recorded the music at Powell Symphony Hall, St. Louis, in 1979, and LIM’s Winston Ma and Robert Friedrich remastered it using their Ultra High Definition 32-bit processing in 2011, releasing the remaster in 2012. The sound they obtain is better than anything else you’ll find in Bizet or Grieg. The definition is rock steady, firmer on the LIM remaster than on the original Telarc disc, and the bass and dynamic contrasts are slightly tauter. What’s more, the LIM brings out the imaging and depth better, too. Now, we’re not talking about night-and-day differences, you understand, but listening carefully and comparing, you’ll hear the improvements. Whether the LIM remastering is wroth the extra money, of course, is up to one’s ears and one’s pocketbook.

As icing on the cake (or to seal the deal, so to speak), the folks at LIM also provide an attractive, high-gloss, hardcover package, a twenty-page bound booklet, and a static-proof inner sleeve. For a complete listing of FIM/LIM products, you can visit their Web site at http://www.firstimpressionmusic.com/.

Email ThisBlogThis!Share to TwitterShare to FacebookShare to Pinterest
Labels: Bizet