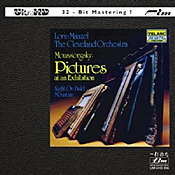 Since 1957, all recordings of Pictures at an Exhibition by Modest Mussorgsky (or "Moussorgsky" as it's spelled here) have pretty much fallen under the shadow of Fritz Reiner's famous RCA performance, which today continues to stand up as the most colorful, most descriptive, most exciting realization of the work available. However, in 1979 Lorin Maazel and Telarc Records were the first people to release a digital version of the music, remastered here by LIM (Lasting Impression Music), an affiliate label of FIM (First Impression Music). Because Maazel did such a credible job with the musical interpretation and Telarc did such a good job with the sonics, we must consider their collaboration though not superior to Reiner's at least in the same breath as the older man's. This LIM remastering simply makes a good thing better.

The Russian composer Modest Mussorgsky (1839-1881) wrote his vivid collection of tone poems (or "sound pictures," as he called them), Pictures at an Exhibition, as a piano suite in 1874. Afterwards, several people orchestrated it, the most famous and most often recorded version being the one we have here, arranged by French composer Maurice Ravel in 1922. Indeed, it really wasn't until Ravel orchestrated it that it became the basic-repertoire piece we know today. Anyway, because the Mussorgsky/Ravel work became so popular, almost every conductor and orchestra in the world have now performed it, most of them recording it, too. So competition is understandably fierce, with Reiner (RCA), Muti (EMI), and Maazel among the standout contenders.

The album starts out, though, with Mussorgsky's Night on Bald Mountain (1867), perhaps as famous as Pictures or more so thanks to Disney's Fantasia and Leopold Stokowski. Nicolai Rimsky-Korsakov orchestrated the one that Maazel plays. Maazel's realization is not as thrilling as Georg Solti's rendering (on Decca, and, coincidentally, also remastered by LIM as a part of the album Romantic Russia), which still sets the bar higher than anyone for ultimate exhilaration. And the old Stokowski arrangement (remarkably, also available on a Telarc from Erich Kunzel and the Cincinnati Pops Orchestra) will hold an affectionately nostalgic place in the hearts of many fans. Still, Maazel offers up a good, sturdy performance, and one cannot fault the Telarc/LIM sound.

It is in the Pictures at an Exhibition, though, where Maazel shines. Mussorgsky based the various sections of the suite on his musical impressions of paintings by his friend, the artist and architect Viktor Hartmann. The idea of the work is that the listener is wandering through a picture gallery viewing the paintings, which the composer recreates in music, going so far as to give us a musical number, the Promenade, to accompany our stroll from time to time.

The Cleveland horns shine forth brilliantly from the very beginning, and command much weight. The Gnome and the Old Castle that follow carry solid characterizations, if not quite as vivid as Reiner or Muti brought to them, nor with quite the sheer orchestral virtuosity of the Chicago Symphony for Reiner. 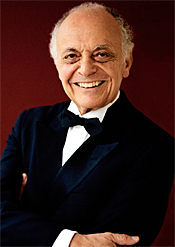 It's really in the second half of the suite, however, that Maazel comes into his own. The Catacombs, the Hut of Baba Yaga the witch, and the gloriously expansive finale at the Great Gate of Kiev show Maazel at his best. Of course, a part of this impression derives from the excellent Telarc/LIM sonics, which really knock you out at the end.

Telarc recorded the two works at the Masonic Auditorium in Cleveland, Ohio, in 1978, and while it's one of Telarc's earliest digital releases, it remains one of their best. Although there was always a good sense of orchestral depth in the Telarc recording, the LIM remastering refines the smoothness of the sound, its warmth, and its naturalness. Dynamics are splendid, with taut, solid impact, and bass and treble show up well extended. The ultraquiet backgrounds ensure a lifelike response, and a light hall resonance adds to the realism.

Given its attractive, high-gloss, hardcover packaging, its twenty-page bound booklet, and its static-proof inner sleeve, the LIM product is a class product all the way. Just don't expect it to come cheap. For a complete listing of FIM/LIM products, you can visit their Web site at http://www.firstimpressionmusic.com/.