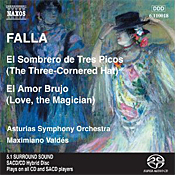 Manuel de Falla (1876-1946) was one of Spain's most important composers of the twentieth century, and this disc brings together two of his most popular pieces of music, the ballets El Amor Brujo (Love, the Magician) and El Sombrero de Tres Picos (The Three-Cornered Hat); plus "Danza" from La Vida Breve.

Maestro Maximiano Valdes and his Spanish orchestra, the Asturias Symphony, present the music well enough, and the Naxos engineers do a reasonably good job capturing most of it realistically. The first piece on the disc, El Amor Brujo, is a rather grim work, about twenty-four minutes long depicting a jealous dead lover haunting his former girlfriend. Valdes performs it in an appropriately dark and foreboding manner. Conversely, El Sombrero de Tres Pico is a lighthearted tale of attempted seduction, the music lasting almost forty minutes. Together, we get quite an ample amount of music, when for a fill-up we have the "Danza." 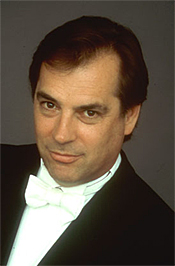 I would not say, however, that Valdes is more colorful in his music making than Charles Dutoit or Ernest Ansermet were in this repertoire (both on Decca). Indeed, by comparison it is still Dutoit and Ansermet who offer up more vitality, especially evident in The Three-Cornered Hat. Yet listeners may find themselves divided on the merits of the sound of the discs, the newer Naxos issue being a bit more subdued, the Deccas brighter or more natural, depending, and definitely more sparkling. It's hardly a moot point, either, as one can find the original Deccas in various configurations on regular CD's and even remastered on audiophile (albeit costly) discs from LIM.

Anyway, the folks at Naxos offer the recordings on both a regular compact disc at mid price and a Super Audio Compact Disc at regular, full price. The SACD offers not only the standard stereo layer but a two-channel DSD layer and a 5.1 surround layer. The Naxos sound, particularly in SACD, is wide, deep, and extended, a tad fat in the upper bass, but fairly lifelike. While this may not be absolute audiophile sound even in its SACD format, it is more than adequate for the occasion.