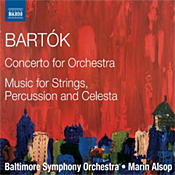 As so often happens in the world of classical recording, it's damned if you do and damned if you don't. I mean, when a conductor and orchestra have to decide on what piece to record, should they go with a relatively unknown commodity and lose potential buyers who have never heard of the work, or should they go with a popular piece and risk losing potential buyers who already have multiple favorite recordings of it? In the case of Marin Alsop and her Baltimore Symphony Orchestra, they have chosen in Bartok to go head-to-head with Fritz Reiner's celebrated RCA recording and both of Georg Solti's high-powered Decca performances. That Ms. Alsop and her team acquit themselves reasonably well on this low-priced Naxos disc is a testament to their talents, which do justice to the composer.

The disc begins with probably the most celebrated music of Hungarian Bela Bartok (1881-1945), the Concerto for Orchestra, the composer's last completed orchestral work, premiered just a year before his death. It's somewhat ironic that after a lifetime of writing music, his final composition would be his most-lasting contribution to the classical library. Bartok said that he titled the piece a "concerto" because of its "tendency to treat the single orchestral instruments in a concertante or soloistic manner." He also noted that the work transitions from the stark grimness of the opening movements, to a "death song" in the third movement, and to a "life-assertion" theme in the last.

Anyway, Ms. Alsop treats this death-to-life progression as well as almost anyone, although there are times when one wishes she had made the contrasts even more pointed. Best of all, she never sentimentalizes or glamorizes the music in the style of, say, a Karajan. She keeps it spare.

The second-movement Allegretto moves along at a graceful, if fairly leisurely, pace. It lightens the mood considerably.  In the third-movement Bartok turns to dark yet lyrical material, which the composer described as a "misty texture of rudimentary motifs." Like the description, the music seems rather generalized, and Alsop handles it in a kind of wispy, dreamlike way, building in mysterious, almost spooky intensity as it goes along, a "lugubrious deathsong," as Bartok called it. 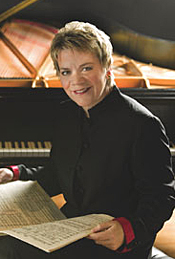 Next, we find a brief Intermezzo borrowing (or parodying) Shostakovich that sets up the dance rhythms of the Finale: Presto, where Bartok went all out to show the vibrancy of life. Alsop treats it gently, yet with much joy. It's a worthy realization of the score.

I wasn't quite as taken by Ms. Alsop's interpretation of the coupling, though, Bartok's Music for Strings, Percussion and Celesta, written in 1936. The composer had by that time been experimenting with "arch" forms, mirrorlike sequences of ideas building in one direction to an arch and then reversing in the second half. While she keeps the shape intact, Ms. Alsop's actual rendition of the piece seems just a tad wanting in atmosphere, impetus, and drive. Incidentally, if you don't actually know the music yet it sounds vaguely familiar to you, it may be because Stanley Kubrick used it in The Shining, sort of eerie music for an eerie film.

Naxos recorded the performances at Meyerhoff Hall, Baltimore, in 2009-2010. In the tradition of so many Naxos recordings, the sound is slightly warm and soft. There is a nice room resonance that lends verisimilitude to the listening experience, so one does feel involved with the actual event. Reasonably good dynamics and frequency range help, too. Midrange clarity is adequate for the occasion, as is a strong mid bass and a moderately good sense of orchestral depth.