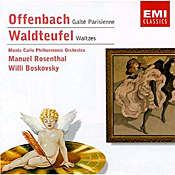 It might be the best seven or eight bucks you spent in a long time. This budget issue from EMI has the distinction of being not only authoritative but spectacularly well recorded. What more could you want for your hard-earned dollar?

In 1938 Manuel Rosenthal pieced together a little ballet from some of the most familiar bits of Jacques Offenbach’s operas La Vie pariesienne, La belle Helene, Orpheus in the Underworld, The Tales of Hoffmann, and others. Rosenthal died in 2003, just short of his 100th birthday, but in his lifetime he managed to record his Gaite Parisienne at least three times, the last one for Naxos when he was in his nineties. Anyway, the recording we have here was one the conductor/arranger made with the Monte Carlo Philharmonic in 1976 when he was a mere stripling in his seventies. 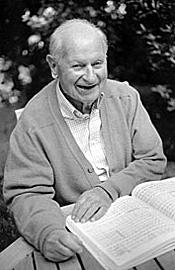 When I first came to the recording on vinyl, I was happily living with my old Fiedler RCA Living Stereo LP from the mid Fifties (now remastered by both RCA and JVC). Frankly, it took me a while to warm up to Rosenthal’s version, but because it sounded so good I gave it repeated listens and it grew on me. Unlike Fiedler, who takes the piece very briskly as a concert work and turns it into a joyously infectious occasion, Rosenthal plays his ballet as a ballet, as a work for dancers actually to negotiate. As such, it does not have the characteristic bounce and sheer adrenaline rush of Fiedler’s more lively account. But Rosenthal’s taking his time does produce some beautiful detail and refinement that is hard to resist, and by the time he comes to the climactic “Can-Cans,” he’s moving along at a pretty good clip. What’s more, his recording is still demonstration worthy, with an amazing bass drum and some incredibly quick transients.

Equally as pleasant, the disc includes four of Emile Waldteufel’s most popular waltzes--Espana, Les Patineurs, Estudiantina, and Acclamations--with Willi Boskovsky conducting the same Monte Carlo Orchestra and also recorded in 1976. If there is any small hesitation about the absolute quality of the Offenbach, there is none whatsoever about the Waldteufel. These are some of the best recordings of the four waltzes ever committed to disc, and the sound appears even better spread out (for reasons unknown) than the Offenbach. If you already have a Gaite Parisienne, that’s OK. This one will make a nice complement to it; and what do you have to lose for the paltry price of experimenting?

Email ThisBlogThis!Share to TwitterShare to FacebookShare to Pinterest
Labels: Offenbach