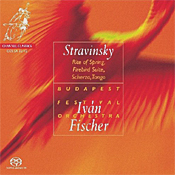 When Igor Stravinsky (1882-1971) premiered his ballet The Rite of Spring in Paris in 1913, the audience pretty much rioted. Regular theatergoers used to elegant, refined dance music had no idea what Stravinsky was up to with his primitive, often fierce rhythms describing some kind of ancient fertility rite. The composer didn't subtitle it "Pictures from Pagan Russia" for nothing.

The score's pounding beat also helped shape the path of subsequent twentieth-century music, making Stravinsky not only controversial but genuinely revolutionary. In these times, we accept The Rite as an established classic, but, obviously, it wasn't always so. Which brings up the subject of how to approach it today; certainly, it still needs a good deal of fire and passion in its presentation, such as the renditions we've heard from Sir Georg Solti and the Chicago Symphony (Decca) or Leonard Bernstein and the New York Philharmonic (Sony). Maestro Ivan Fischer and his Budapest Festival Orchestra, though? Not so much so on this present disc.

In the Rite's "First Part:  Adoration of the Earth," Fischer handles the lyrical portions of the score splendidly, delicately and airily, with plenty of atmosphere. But he seldom seems to let loose as one might expect, despite a fairly quick pace throughout. It's not that the performance lacks energy; it has energy to spare. It's just that Fischer's interpretation seems a touch static at times, providing fewer thrills than it might.

The conductor has more success with the "Second Part: The Sacrifice," where he seems to be getting more in touch with Stravinsky's intensions. Here, Fischer combines his exceptional lyricism with the composer's intense desire to conjure up a full breakthrough of spring after a frozen Russian winter. Thank the tympanist, too, for his efforts in this regard. Nevertheless, the aforementioned Solti and Bernstein recordings, along with others from Boulez (Sony), Muti (EMI), and Stravinsky himself (Sony) have already provided us with plenty of beauty and excitement in the work; as a result, it's hard for Fischer's account to compete easily. 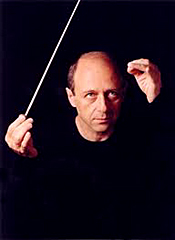 Where the current disc does excel is with the accompanying pieces. The 1919 suite of seven movements from The Firebird comes off especially well, very mysterious, moody, and exotic. The Scherzo a la Russe and Tango show us an older, lighter, more-playful Stravinsky, music in which Fischer appears to take particular delight.

This is a recording that the folks at Channel Classics seem to have meant as an audiophile demonstration piece, but it's also one that a person might have to own an SACD multichannel playback system to appreciate fully. The engineers recorded the performances at the Palace of Arts, Budapest, in 2010, and the two-channel stereo sound to which I listened on this hybrid disc is wonderfully cohesive, with a lifelike sense of stage depth and a wide stereo spread. Overall transparency, though, is only average, with a slight veiling of the midrange; a faint, thick blurring of detail; and a good deal of ambient hall resonance. Bass response, too, could be a bit stronger as well as dynamic impact, at least in the "First Part" of the Rite. By the "Second Part," however, the dynamics kick in a little better. It's a realistic sound, to be sure, if a tad distant unless played relatively loudly, in which case the music becomes a tad rough. So, on the one hand we get natural, potent sonics and on the other hand we get a somewhat heavy, clouded showing. I have no doubt that in its multichannel format the sound should come up even better than what I heard.