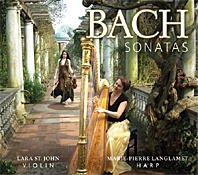 In the accompanying booklet note to Bach Sonatas, Dr. James Seymour Helgeson writes at length about what is "authentic" or not about today's performing practices. One thing he points out is that composers like Bach would transcribe their own works for various other instruments, often to accommodate the players on any given occasion. So it is not unusual that Canadian violinist Lara St. John would want to perform several of J.S. Bach's sonatas for violin and harpsichord in transcriptions for violin and harp. She has said that for these pieces she finds the harpsichord rather unsubtle in accompaniment and the modern piano heavy-handed. The harp, on the other hand, she feels better suits the spirit of the music. After listening to these unique, though not entirely inauthentic, transcriptions for violin and harp, I'd have to agree with her.

All of the works sound more delicate with harp accompaniment, lighter, airier, more diaphanous, more ethereal. Indeed, after hearing just the first sonata, I couldn't imagine wanting to hear it any other way. Still, it's the Sonata No. 3 that steals the show. It is particularly haunting, a little melancholy, and entirely enchanting, especially with the harp. Two of the four movements are adagios, ensuring a serene atmosphere, and the performers take the two allegros at a correspondingly relaxed pace so as not to disrupt the tranquil continuity of the piece. I'd recommend the album if this were the only selection on it, it's that good. 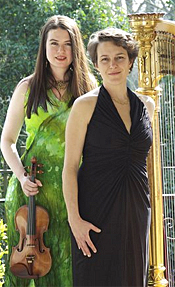 The final three works on the disc Bach the elder may or may not have actually written, but it's close enough. Ms. St. John's and Ms. Langlamet's playing of the Sonata in G minor, originally for flute and harpsichord, has a graceful, almost playful quality to it. Then, we get the Sonata in B minor, also originally for flute and harpsichord, which is probably the most creative of the pieces on the album; it is quite a lot of fun, actually, with the performers appearing to have fun with it as well. The two musicians conclude the program with the Siciliana movement from the Sonata in E-flat, a perfect ending to the proceedings because of its sweet, gentle character.

It's hard to argue against the amiably refined playing of Ms. St. John and Ms. Langlamet or their decision to perform together in the arrangements they do. The results are not just enchanting but sometimes stunning, turning familiar tunes into welcome new creations. Count the idea a success on my end.

The folks at Ms. St. John's Ancalagon label recorded the performers at Teldex Studio Berlin in January, 2011. On the two-channel stereo layer of this hybrid 2.0/5.0 SACD, the sound is warm and full, with a pleasant ambient bloom on the instruments. The recording is slightly close-up but not so much that the performers are in our lap; it's just close enough to capture the crisp, vibrant tone of Ms. St. John's 1779 "Salabue" Guadagnini violin and the rich, mellifluent moods of the harp. In the first sonata I thought the resonance of the low harp strings was a tad too prominent, but the issue disappeared by the second selection. There is no forwardness to the sonics, no edge, no brightness, nothing to interfere with one's enjoyment of the music.