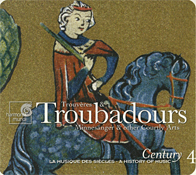 Listening to this disc and reading the extensive booklet notes that go with it are a little like taking a history course. It's a bit overwhelming. Fortunately, if you just sit back and listen to the music, the album can provide quite a lot of enjoyment, too.

The album reviewed here covers five areas of the Middle Ages. The first is the music of the troubadours of Southern France in the 11th and 12th centuries. Troubadours were, as the booklet explains, the "first known representatives of lyric poetry which can be described as secular (that is, non religious) and more specifically as courtly." Today, we tend to think of troubadours as wandering minstrels or singers, but now we know they were more than that, at least in the beginning. Rene Clemencic and his Clemencic Consort, aided by soprano Pilar Figueras, perform three songs of the troubadours to start the program. While the tunes aren't exactly showstoppers, they do give us a feeling for the age, and the singing is splendid.

The next section of the album covers "The art of the Trouveres," who sort of took up where the troubadours left off, this time in Northern France in the 12th and 13th centuries. Here we find seven song selections done by Andrew Lawrence-King and the Harp Consort, aided by the vocals of Stephen Harrold, Julian Podger, Ian Honeyman, Paul Hillier, and the Theatre of Voices. I found this selection of tunes somewhat hit-and-miss, but there is no denying the artistry involved. 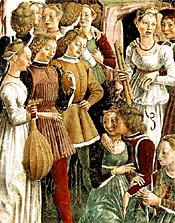 The third segment of the album was my favorite, the Cantigas de Santa Maria, canticles (poems or songs of praise) from Spain in the 13th century, mostly dedicated to the King of Castille, Alfonso X the Wise. Here, the Dufay Collective present primarily instrumental music, and it's lively and engaging, practically stealing the show.

The next section of the program involves the music of the 13th, 14th, and 15th-century German minnesingers (singers of love songs). Again, we get more courtly songs of romance, performed by Mary Springfels and the Newberry Consort, with help from Drew Minter, David Douglass, and Kevin Mason. It's all quite lovely, actually, if a bit heavy.

The program concludes with two selections from the Carmina Burana. No, not the one by Carl Orff; that came much later, with Orff finding his material in the original Carmina Burana of the 13th century, a manuscript discovered in the Bavarian monastery of Benediktbeuren. While I can't say I liked the music much, the Clemencic Consort, who opened the album, close it as well as one could expect.

The sound, which comes from several previously released Harmonia Mundi recordings bearing publication dates between 2003 and 2005, is uniformly excellent. Whether the ensembles are relatively large or simply duets, the sonics treat them with clarity and cleanness, featuring a wide stereo spread when necessary and a wonderful sense of presence. The acoustics are often quite resonant, providing a pleasant and realistic ambient bloom on the music. Dynamics are strong and pointed, and midrange transparency is top notch without adding any brightness or edge in the process. When the sound needs depth, we get depth; when it needs a quick transient response, we get a quick transient response; and when voices need a natural accuracy, we get a natural accuracy. Very nice.