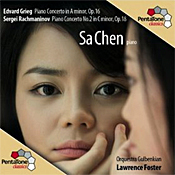 Despite the album listing the Grieg Concerto first on the cover and the spine, it is the Rachmaninov that begins the disc. Sergei Rachmaninov (1873-1943) premiered his Piano Concerto No. 2 in C minor, Op. 18, in 1901, after a bout of depression that only a hypnotherapist, Dr. Nikolai Dahl, could relieve. The composer thus dedicated the work to Dr. Dahl and went on to compose his Second and Third Symphonies, Third Piano Concerto, Paganini Rhapsody, Symphonic Dances, and a load of other popular stuff. Such is the power of persuasion.

Chinese pianist Sa Chen takes the opening movement of the Rachmaninov, marked Moderato, in a most Romantic, lyrical manner, matching what most of us have come to expect from the composer's intentions. However, she doesn't try to impress the listener with any untoward heroics, while yet bringing out the virtuosic qualities of her playing. She seems to enjoy emphasizing the beauty of the Russian melodies, using perhaps a lighter touch than many of her colleagues in the work.

In the central Adagio, Sa Chen appears a bit more leisurely than I've heard, which depending on your point of view either makes the music more appropriately lovely or just plain sluggish. I found her slower-than-usual tempo slightly obscured the primary melody's line, which sort of gets lost in the beauty of the notes.

The big finale really sells the Concerto, of course, and Sa Chen shines brilliantly in it. It features one of the most popular and instantly recognizable themes in all classical music, and the pianist makes the most if it, with conductor Lawrence Foster and Lisbon's Gulbenkian Orchestra providing a fine, nonintrusive accompaniment.

The pairing of the Piano Concerto in A minor, Op. 16, by Norwegian composer Edward Grieg (1843-1907) with the Rachmaninov is apt since many critics feel it was Grieg's work that inspired Rachmaninov. Anyway, Sa Chen takes much the same approach to this piece that she did in the Rachmaninov, bringing out the music's more lilting, more charming qualities at the expense of some of its brawnier aspects. At the risk of sounding sexist, it seems to me a gentler, more-feminine take on the Concerto than several other male pianists have recorded. Nonetheless, Sa Chen's interpretation is never without its own delights, not the least of which is her liquid-smooth delivery and polished, expressive tone.

The sound, recorded in the Grande Auditorio of the Calouste Gulbenkian Foundation, Lisbon, in 2011, is warm and accommodating. Definition is a tad on the soft side, yet everything is easy and comforting on the ear without being flabby or dull. The recording nicely balances the piano with the orchestra, which we hear spread out broadly behind it. In the two-channel mode of this hybrid stereo/multichannel SACD to which I listened on a Sony SACD player, the dynamics sounded strong, sometimes even robust, with more than adequate bass and treble extension. While the PentaTone sonics may lack the ultimate transparency of several other recordings of this material (with LIM's remastering of Decca's 1973 recording of the Grieg with Radu Lupu, Andre Previn, and the London Symphony, you're in a whole other soundscape), they provide the advantage of a big, full, spacious, ambient aural presentation with luxuriant washes of sound, all of which goes a long way toward selling the music.