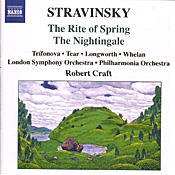 I didn't care overmuch for Maestro Robert Craft's conducting of Stravinsky's Firebird, issued by Naxos a few months earlier than this release, but I found his reading of The Rite of Spring more to my liking. Craft is a noted expert in things Stravinsky, having been a close friend of the composer and a co-conductor on occasion. Still, that doesn't mean we're all going to warm to his interpretations.

While Craft seemed almost lackadaisical in his conducting of The Firebird, he seems positively energized in The Rite of Spring, if anything zipping through it at too hurried a clip. I compared his timing with several other conductors, Georg Solti and Colin Davis among them, and found Craft a full five minutes faster through a work usually lasting little more than thirty-five minutes.

Nevertheless, the quick tempo adds a degree of tension to the music that is most exhilarating in places, and it does little harm to the basic story idea. This is not to say I would recommend Craft's recording above classic interpretations from Muti, Solti, Monteux, Boulez, Dutoit, Dorati, Davis, Rattle, Stravinsky himself, and others.

Even more, I enjoyed the disc's coupling of Stravinsky's oft-neglected, complete one-act opera The Nightingale, although I am personally more keen on the music alone than on much of the rather static singing. Still, it's beautifully rendered by all concerned.

The sound, recorded in 1995 with the LSO for The Rite of Spring and in 1997 with the Philharmonia for The Nightingale and reissued here, varies only slightly from one work to the next. The Rite seems cleaner and stronger to me, the Nightingale smoother and softer. In louder passages there is a touch of stridency in the higher notes, but it's nothing to worry about, really. The bass line in the Rite is strong if not particularly deep. As we have a master conductor at the helm of both these pieces, it's hard to argue the worth of this bargain-priced disc.