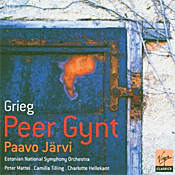 Of the recordings I've now heard by Paavo Jarvi, this one of Grieg's Peer Gynt finds him most at home. Indeed, it is one of the handful of finest performances of this music I have found, and it is a treat for the ears as well.

People probably know Edvard Grieg (1843-1907) best for his incidental music to the Ibsen's play Peer Gynt as well as for the Piano Concerto, although my guess is that most listeners would be more familiar with one or the other of the Peer Gynt concert suites than with the complete incidental music. In any case, it is not the complete incidental music we get here, anyway; it's an abridged version, about sixty minutes, or two-thirds, of the original ninety minutes of music. If you want the complete score, you'll have to go elsewhere, to Dreier, perhaps, on Unicorn or to father Neeme Jarvi on DG. But for the listener who wants the best possible sound and is willing to give up a little something to have most of the music on one disc, this release should fit the bill. 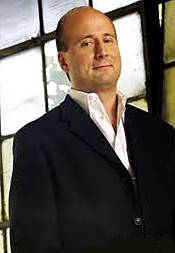 All of the most familiar pieces are here, from "The Hall of the Mountain King" through "The Death of Ase," "Morning Mood," "Arabian Dance," "Anitra's Dance," "Solveig's Song," to the closing "Solveig's Cradle Song," and many more, twenty of the twenty-six sections in all. The soloists--Peter Mattei, Camilla Tilling, and Charlotte Hellekant--are uniformly beautiful in execution and the two choirs--the Estonian Girls' Choir and the Estonian National Male Choir--are in equally top form. The music still doesn't seem all of a piece to me, but that is the nature of the score, accompaniment as it is to something else.

Virgin's sound, recorded in the Estonia Concert Hall, Tallinn, Estonia, is mostly excellent, perhaps a touch forward and bright in spots and not as dimensional as I'd like it to be, but pretty well balanced all the way around. Bass is adequate without being overpowering; mids are natural except in the highest regions; and treble is light and airy. This is an outstanding set in almost every way.