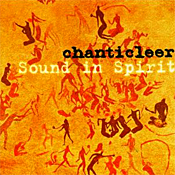 Chanticleer is the immaculate male choir that has gained so much attention in recent years, winning numerous plaudits, and becoming so popular. Their disc Sound in Spirit is a slight departure from their usual early religious music, traditional American tunes and hymns, gospel, spirituals, Renaissance songs, and the like. I don't think it's their best material, but for lightweight music, it works well enough.

If I may quote from the album's producer, Steve Barnett: "It is the first Chanticleer recording to be conceived as a total experience--ideally it should be listened to from beginning to end without pause--thus there is no silence or space between tracks. It is the first to add outdoor ambient sounds." And I might add, it is also the first Chanticleer recording to sound like a throwback to the "New Age" music of the 1980's and 90's so beloved of a big segment of the record-buying public.

The music of the disc dates from the thirteenth century to the present, from chants and liturgical Latin texts to modern compositions written especially for this recording. The choir sings them magnificently, their voices as always sounding three times bigger than they are, with phrasing and intonation of unparalleled precision. 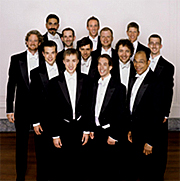 However, for many listeners the whole affair may sound like a single, extended, seventy-five-minute note. With the exception of two early works dating from the thirteenth and sixteenth centuries and one Native American-inspired piece, most of the music sounds so relaxed, so ephemerally vaporous, it borders on the transitory and commonplace. What's more, the recording, made at Skywalker Sound, is so resonant most of the time and the natural ambient noise of frogs, crickets, and a running creek so clichéd, that the album runs the risk of appearing like one of those old "Mystic Moods" concoctions of the Sixties.

I don't mean to be harsh. The music really is quite spiritual in nature, and the singers are glorious, as always. But the disc did not persuade me while listening to it that I would want to play it again as anything but background wallpaper, and I'm not sure that is what Chanticleer had in mind. OK, I know I'm just being a grump; most people will love it.

Email ThisBlogThis!Share to TwitterShare to FacebookShare to Pinterest
Labels: Chanticleer