The Best of Delius (CD review) 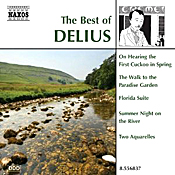 If you are still unfamiliar with the music of English composer Frederick Delius (1862-1934), this budget-priced Naxos disc might be a good place to start. Delius was writer of mostly short, pastoral works, long on quiet, languid atmosphere and short on excitement or bombast. "Summer Night on the River" is the one title by him that best sums up his style. Listening to his music is like floating gently down a river on a warm summer's evening, going nowhere in particular but simply enjoying the ride.

The various brief works on the disc represent the essence of the composer, things like the aforementioned "Summer Night on the River," plus "On Hearing the First Cuckoo in Spring," "Florida Suite: By the River," "The Walk to the Paradise Garden," "Winter Night (Sleigh Ride)," "Idylle Printemps," and others. David Lloyd-Jones and the Royal Scottish National Orchestra and English Northern Philharmonia play most of the music, with Richard Studt and the Bournemouth Sinfonietta and Myer Fredman and the New Zealand Symphony filling in on a few other tunes. They all do justice to the gentle qualities of the music.

The sonics are fairly typical of what Naxos does, sounding fine but not in the first order of audio recordings. It's slightly soft, warm, and resonant, which, in fact, tends to fit the mood of the music.

The only minor drawback to the Naxos collection is that for about the same price you can get most of this music and more played by the master, Sir Thomas Beecham, on a low-priced EMI two-disc set. Beecham championed Delius in the early part of the twentieth century and pretty much put him on the map. Ironically, perhaps, while the Beecham recordings are early stereo from 1956-57, they actually sound better, more transparent, than most of the newer Naxos material, recorded between 1999-2004. Anyway, it's still good to have the Naxos disc with us; the more Delius in the camp, the better.

Email ThisBlogThis!Share to TwitterShare to FacebookShare to Pinterest
Labels: Delius