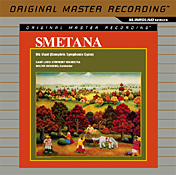 Originally issued by Vox/Turnabout in 1975, this performance by Walter Susskind of Bedrich Smetana's set of descriptive tone poems has remained a favorite recording of many listeners for over thirty-five years. It's nice to hear it so lovingly remastered by Mo-Fi.

Smetana completed Ma Vlast, "My Country," in 1874 and dedicated it to the city of Prague. The work is, as most of you know, made up of six interrelated symphonic pictures, the first four, "Vysehrad," "Vltava" ("The Moldau"), "Sarka," and "From Bohemia's Woods and Fields," describing the sights and sounds of Smetana's native Czechoslovakia, while the last two, "Tabor" and "Blanik," celebrate famous military victories in Czech history. Incidentally, the composer requested that "Tabor" and "Blanik" never be played separately; that is, never without the other. Anyway, the complete cycle displays a varied number of moods and actions that have delighted audiences for as long as it's been around.

Maestro Susskind's way with the work is elegant and refined, much as we might find a Marriner or a Mackerras approaching the score. Not that the interpretation lacks energy or excitement--it would be hard to deny the music its due, no matter who was conducting it--but it does seem to lack an essential intensity that several other favorite conductors demonstrate.

Among the recordings I compared are the totally committed one with Rafael Kubelik and the Czech Philharmonic on Supraphon, the involving account with Paavo Berglund and the Dresden State Orchestra on EMI Seraphim, the period-instruments version by Roger Norrington and the London Classical Players on Virgin, the stylish production with Vaclav Neumann and the Leipzig Gewandhaus on Berlin Classics, the winning rendition with Libor Pesek and the Royal Liverpool Philharmonic on Virgin, and the wholly involving interpretation with Antal Dorati and the Concertgebouw on Newton Classics. By comparison, Susskind seems a tad lax, content to let the music set its own course, certainly not a bad idea. In any case, Susskind is best in the surging currents of "The Moldau" and the sweeping hills and valleys of the "Bohemia" section. Then again, the two rather bombastic concluding poems have never impressed me as much, so Susskind may not be at fault for not offering them up in a more rousing manner.

The sound, originally made, as I said, by Vox in the mid 70's, as remastered by Mobile Fidelity on this hybrid SACD issue is ultrasmooth, ultraclean, and uncommonly widespread, even on the stereo layer to which I listened, but by comparison again to the recordings mentioned above, it's also a tad too warm and soft. Interestingly, it's the Berglund and Dorati recordings I found sonically superior on my system (VMPS RM40s)--more detailed, transparent, and dynamic than the rest. And the Berglund, at budget price, is also the cheapest of the bunch I auditioned. But for those listeners who have always cherished the Susskind reading, it has undoubtedly never sounded so good.

Email ThisBlogThis!Share to TwitterShare to FacebookShare to Pinterest
Labels: Smetana