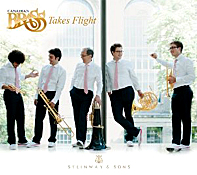 The folks who comprise Canadian Brass have been tootling their horns for over four decades now, and audiences never seem to tire of their enthusiastic and virtuosic musicianship. Of course, the membership changes from time to time, with the current five players being Eric Reed on horn, Christopher Coletti and Brandon Ridenour on trumpets, Achilles Liarmakopoulos on trombone, and Chuck Daellenbach on tuba. No matter the makeup of the group, however, they always appear to have been performing together forever, they sound so well integrated.

This time out on Canadian Brass Takes Flight they perform a motley assortment of tunes that apparently not even they can adequately explain. It doesn't hurt the music, but it does complicate it.  For instance, on the back cover their publicist writes, "Canadian Brass truly takes flight with this new album--their premiere release on Steinway & Sons." Fair enough, given that the lead number is Rimsky-Korsakov's Flight of the Bumblebee and another is Bach's Air on the G String. But how to explain the inclusion of Kompanek's Killer Tango or Mozart's Turkish Rondo? Inside the Digipak we read, "Canadian Brass Takes Flight is a kind of 'state of the union' address, as the group's current membership revisits and refreshes examples of its unique contribution to the brass quintet universe--four decades of performing, four centuries of music." Again, fair enough. Maybe they mean the current disc to be a sort of greatest hits album, newly recorded. If so, there is little rhyme nor reason for the selections except that somebody liked them.

In any case, it's the music that counts, and the music is splendid, despite the sometimes jarring juxtapositions of the tunes. We get eighteen tracks that range from classical (Bach, Brahms, Mozart, Rimsky-Korsakov) to tangos to gospel to Dixieland jazz. Whatever the music, you can count on Canadian Brass to perform it in a lively, sprightly fashion, with the utmost precision along the way. Personally, I enjoyed the several Bach selections best of all, along with the tangos.

Things get a little static by the middle of the program, unless you are a devoted brass afficionado, but they pick up with Bach's Air. The album closes with three numbers in New Orleans jazz style, the group's usual opening number, Just a Closer Walk with Thee, here closing the show. While it's a mixed bag, as I say, it's undeniably fun. 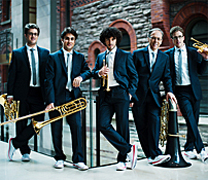 Canadian Brass's new label is Steinway & Sons (or it's their co-label as this is a little confusing, too. The Digipak lists the recording as a cooperative project among Steinway & Sons, ArkivMusic, and Opening Day Entertainment Group, with the financial support of the department of Canadian Heritage, Canada Music Fund, and Canada's Private Radio Broadcasters).

Whoever produced the album engineered it well, recording the group at Christ Church, Deer Park, Toronto, Canada, in August of 2011. The sound they obtain is full and resonant, a mellow acoustic to match the richness of the instruments, with a pleasant sense of occasion in the ambient environment. The sonics are ultrasmooth, or as smooth as brass instruments can be. One can discern each of the five instruments clearly, spread out convincingly across the stage, miked at an ideal distance for easy listening.

Of minor note, the "brass" is not entirely brass. Again, I quote from the Digipak: "The Canadian Brass performs exclusively on instruments manufactured by Conn-Selmer, Inc. under the legendary brands Vincent Bach and C.G. Conn. Skillfully handcrafted, each instrument is a blend of classic design, elegant styling, and signature sound, beautifully culminating with the Canadian Brass trademark 24K gold-plate finish." All that glitters....