Schubert: Piano Quintet in A Major "The Trout" (HQCD review)

Also, String Trio in B Flat. Clifford Curzon and members of the Vienna Octet. HDTT HQCD239. 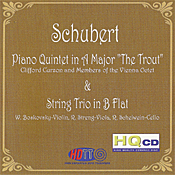 Austrian composer Franz Schubert (1797-1828) wrote his Piano Quintet in A major, D. 667, in 1819, when he was only nineteen; however, it never saw publication until 1829, a year after his death. Popularly known as "The Trout" because of its fourth-movement variations on a song of that name Schubert had written earlier, the piece has become one of Schubert's most-loved and most-admired compositions the world over.

It begins with an Allegro vivace in sonata form, with a harmonic development that's slow at first but becomes quicker. Curzon and his friends offer up a wonderfully easygoing yet spirited and spontaneous performance. This sounds like the kind of reading the young Schubert and his friends might enjoy listening to themselves of an evening.

Next is an Andante, which under Curzon comes across quite serenely. It's lovely, one of the most beautifully played you'll find in any recording of the work.

In the center of the work is the Scherzo: Presto. Here, we get a dynamic presentation, with Curzon and his fellow musicians adopting a fairly quick pace, a nice contrast to the calm of the previous movement.

Then we get the Andantino - Allegretto, the theme and variations on Schubert's lied Die Forelle ("The Trout"). Common to other variations the composer wrote, these variations don't actually change the original song into anything new or thematically different; instead, they rely on embellishments of the melody and variances of mood. Curzon takes the variations elegantly, with refined, stylish support from his fellow players.

The finale is an Allegro giusto, which Curzon and company take more leisurely than most other ensembles. Still, it's wholly in character with the rest of the reading, providing a sweet, lyrical end to their interpretation.

As a companion piece, the disc contains Schubert's little fragment, the String Trio in B flat major, D. 471, another piece of felicitous music. Here, we find Willi Boskovsky on violin, Rudolf Streng on viola, and Robert Scheiwein on cello offering a delightful rendition of the music.

Decca recorded "The Trout" and the String Trio at the Sofiensaal, Vienna, in 1957 and 1964 respectively. The objection I've always had to the sound of Decca's own LP and CD transfers of "The Trout" is that they tended toward the thin, brittle, noisy side. HDTT (High Definition Tape Transfers), which remasters older, public-domain material from tapes and LP's, have eliminated most of the background noise and tamed the string tone. In doing so, they have also diminished some of the recording's sparkle, but it seems a reasonable trade-off. Therefore, while the sonics are still not of the highest possible quality, they are quite easy on the ear, with good range, body, and impact. The overall aural picture on the HDTT is now mostly warm and mellow, the piano a little more recessed into the ensemble, more a part of the group than ever before. It's a definite improvement.