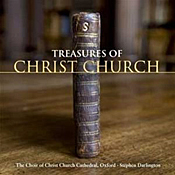 The Choir of Christ Church Cathedral, Oxford, has been doing this kind of thing for close to five hundred years, singing beautiful songs. No, not the same choristers, although by the degree of polish they display, you'd think the present singers had been around for ages.

Cardinal Wolsey appointed the first Cathedral Choir director, John Taverner, in 1526, and the choir has been going strong ever since, led by such distinguished directors as Taverner, William Walton, Simon Preston, and its current leader, Stephen Darlington. The makeup of the Cathedral Choir includes twelve men and sixteen boys, the men lay clerks and choral scholars or academical clerks, the boys, students at Christ Church Cathedral School and ranging in age from eight to thirteen, chosen for their musical skills. The present disc lists seventeen choristers, five altos, five tenors, six basses, three instrumentalists on one selection, and organist (director) Clive Driskill-Smith.

The seventeen selections in the program contain works by composers from the sixteenth century to the present, all of the works having strong ties to the cathedral and its library of original manuscripts. I won't try to cover all of the selections, but I will point out a few tracks I found particularly affecting.

Zadok the Priest by George Frideric Handel begins the concert, the piece justly famous and exercising the choir's dynamic range. In contrast to the Handel, the next number is Set me as a seal by twentieth-century English composer William Walton, the music more personal and featuring more individual singing.

Speaking of singing, one cannot overlook the musical accomplishment of the choir. They perform with refinement and distinction throughout, the articulation precise, the harmonic integration letter perfect. The singing is a pleasure to the ear.

The next piece is one of my favorites, Thomas Tallis's Salvator mundi, a hauntingly lovely work sung with conviction. Almost of equal beauty is the Ava Maria of Robert Parsons, a more complex piece of music than its sixteenth-century composition date would indicate.

Benjamin Britten's A Shepherd's Carol is just famous and given a sensitive reading by the choir, with some especially fine solo passages. Likewise, Bethlehem Down by Peter Warlock comes across with sweet assurance.

Of all the twentieth-century music on the album, John Rutter's Canticle of the heavenly city perhaps sparkles the most radiantly. Then, Thomas Weelkes's Hosanna to the Son of David brings the festivities to a fittingly triumphant conclusion.

Avie recorded the choir in the Chapel of Merton College, Oxford, England, in March, 2011. The choir likes to boast that their sound is as much a product of their venue as the singers, and certainly the Merton College setting flatters the presentation. As we might expect, the sonics are wide and spacious, yet they are reasonably intimate, too, a pleasant combination. Although miked at a modest distance, the organ seems a trifle soft and the voices at times a tad bright. Played too loudly, things can sometimes appear a bit fierce, but at a realistic volume level that approximates what one might hear live, the choir sounds clean and vibrant, the acoustic warm and accommodating, and the separation of voices excellent.