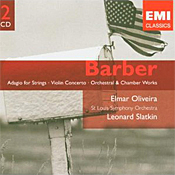 I mean no disrespect to a fine conductor, but I have not always found Maestro Leonard Slatkin's musical interpretations to be in the uppermost ranks of great performances. Perhaps this is unfair, given that the competition among truly great conductors is so easily accessible on disc. But in the orchestral works of American composer Samuel Barber (1910-1981), Slatkin comes into his own, and there probably isn't another conductor, short of Leonard Bernstein, who illuminates the composer's music so felicitously.

This two-disc set presents a well-rounded view of Barber's output from youth to old age. Among my favorites are, of course, the famous Adagio for Strings as well as the three Essays for Orchestra. The Adagio goes without saying, and Slatkin's slow, measured, and totally affectionate reading of it is one of the best on record.

The Essays date from the 1930s, 1940s, and the late 1970s, thus reflecting three phases in the composer's life. Actually, the contrasts are not as striking as the similarities; all three are lightweight but delightful. Well, OK, most of Barber is lightweight, but that's beside the point. The Violin Concerto is especially light, but it too is given over at times to some lovely melodies.

While Slatkin and his St. Louis players handle the orchestral duties, on disc two we find a number of smaller solo, duet, and quintet pieces (concluding with Slatkin again and the Third Essay for Orchestra). I didn't care much for the Cello Sonata, but in Excursions, Nocturne, Summer Music, and Souvenirs, we find delectable Impressionistic echoes of Debussy, Delius, and Satie. The music doesn't always go anywhere in particular, but like a pleasure ride in the country, the trip itself is worth one's time.

EMI recorded the purely orchestral sections in the mid to late Eighties, and they recorded smaller works in the mid Nineties, all in digital. I can't say any of it is the best sound I've ever heard, but it surely fits the relaxed mood of most of the music. I had about a half a dozen recordings of the Adagio on hand for comparison, almost all of them sounding clearer, sharper, and more detailed than Slatkin's account. Yet despite the softer, warmer acoustics of the EMI recording, the Adagio and the other pieces with the St. Louis Orchestra sounded just right to me. A deep bass and some clean midrange and highs are quite radiant as they beam through the mid-bass fog. The solo pieces tend to come off best, but, as I say, there is nothing seriously wrong with any of the sonics. The set offers the listener a pleasant, useful, and inexpensive way to get acquainted with an American original.

Email ThisBlogThis!Share to TwitterShare to FacebookShare to Pinterest
Labels: Barber