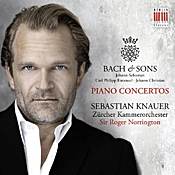 The concept behind the album Bach & Sons is to present similar music from two generations of Bachs, Johann Sebastian the father and Carl Philippe Emanuel and Johann Christian, two of his sons. The idea is not only to entertain with wonderful music but to point up the differences in musical styles from the late Baroque to early Classical periods. German pianist Sebastian Knauer, English conductor Sir Roger Norrington, and the Zurich Chamber Orchestra are more than happy to demonstrate these musical changes in four works by the family of composers. It doesn't hurt, either, that the disc shows off Maestro Norrington's credentials as the new principal conductor of the Zurich ensemble, bringing with him a firm grasp of period style and performance.

The program starts with the Piano Concerto No. 1 in D minor, BWV 1052, by Johann Sebastian Bach (1685-1750), a work that began life as a violin concerto, which Bach then turned into a harpsichord concerto, and which Knauer here plays on piano. Knauer and Norringotn are clearly of a single mind about the interpretation, producing a recording of great vitality and increasing joy.  Knauer's virtuosity is always on display (did Bach himself play as well, one wonders), yet it never overpowers the music.

Next up comes the Piano Concerto in E major, Wq. 14 (1744), a work by Carl Philippe Emanuel Bach (1714-1788), J.S.'s son. A generation had passed and we see the music has grown and matured considerably, specifically in the use of a slightly larger ensemble, more dynamic contrasts, and more-sophisticated phrasing. C.P.E. Bach's piece simply sounds more modern, the piano exhibiting greater subtlety in its solo passages, and the whole work evoking a smoother, more harmonic tone than that of the father.

Then, perhaps to point up these differences further, Knauer and company go back to Bach the elder for J.S.'s Piano Concerto No. 2 in E major, BWV 1053. This time Bach reused one of his organ concertos to remodel into the harpsichord concerto we get here on the piano. Of course, Bach added a good deal more elaboration to the solo piano part, which Knauer seems pleased to demonstrate.

The program concludes with the Piano Concerto in E-flat major, Op. 7, No. 5 (1770) by the youngest Bach son, Johann Christian (1735-1782). Here we find a greater rapport between soloist and orchestra and fewer interludes between solo and orchestral parts than in the back-and-forth arrangements we hear from the father. There is also a greater dependence on thematic development within each movement, so with J.C. we're moving closer to Haydn and Mozart territory. Again, Knauer and Norrington show their affinity for the music and the style and offer up a silky smooth yet sparkling reading, the final movement particularly intoxicating.

Recorded in 2011 in Zurich, ZKO-Haus, the sound is clean and well balanced, with the piano up front and personal. The relatively small group of players appears not too widely spread out behind the soloist, so it's not an especially spectacular recording, just a fairly natural one. Clarity is fine and definition solid, an appropriately proportioned resonance giving the music a lifelike feeling. It's all quite beautiful, actually, the recording and the music.

That's one grim-looking picture of Mr. Knauer on the cover, though.