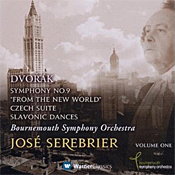 Maestro Jose Serebrier has been leading and recording orchestras for close to fifty years, making him one of the old guard among current classical conductors. By his own count, he has recorded the music of Czech composer Antonin Dvorak (1841-1904) at least three or more times in the past, so he knows what he's doing. Now, he embarks on a complete Dvorak symphony cycle for Warner Classics, beginning with this disc of the Ninth Symphony and several accompanying works.

The program opens with Dvorak's Slavonic Dance No. 1, Op. 46, which gets things off to an energetic start. This was one of the composer's early successes, inspired as he was by Brahms's Hungarian Dances and urged to do so by no other than Brahms himself. Serebrier does a commendable job maintaining the work's forward thrust.

The centerpiece of the album, though, is the Symphony No. 9 "From the New World." Many listeners over the years seem to hear instances of American idioms in the music, when in fact most of it Dvorak said was entirely original. Its title, "From the New World," really only came about because Dvorak happened to be living in New York at the time he wrote it. While to some small degree local tunes may have inspired the composer, the music is clearly Czech in flavor. At the very least as Leonard Bernstein once remarked, one might consider it multinational. Whatever the case, Serebrier zips through the first movement with a healthy conviction, ushering in an even quicker-paced Largo than one usually hears. It's still quite lovely, if a little on the perfunctory side.

The conductor has a good time with the Scherzo, keeping it light and airy while still generating a good deal of excitement. However, both the composer and the conductor save up their big guns for the finale, which brings the work to a happy and jubilant close. Unfortunately, there are quite a few rival recordings, and with this one you'd really have to want the couplings to make it competitive. Otherwise, you might be better off with any one or more of my own favorites: Kertesz and the LSO (Decca), Reiner and Chicago Symphony (RCA or RCA/JVC), Dorati and the New Philharmonia (HDTT), Kertesz and the Vienna Philharmonic (London), Macal and the LPO (EMI), Neumann and the Czech Philharmonic (Denon), Kubelik and the Berlin Philharmonic (DG), and Alsop and the Baltimore Symphony (Naxos) among others.

Now, speaking of couplings, the program concludes with the Czech Suite, Op. 39, followed by the Slavonic Dance No. 2, Op. 72, both of them showing plenty of color and rhythmic flair. In particular I thought the lyric simplicity and lilting beauty of the Suite was enough to make exploring the disc worthwhile.

Recorded at the Lighthouse, Poole Arts Centre, Poole, Dorset in 2011, the sound is notable for its high-end sheen and fairly transparent midrange. It suffers slightly from an undernourished low end, though not by much, and a touch of treble harshness. So, the balance is just a tad off, while the clarity is exemplary. I had hoped for a bit more orchestral depth, too, made up for by a smooth upper bass and a pleasant sense of resonant bloom. Overall, the sound is reasonably realistic and brings much enjoyment.