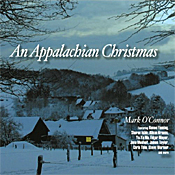 Anytime's a good time for Christmas music, especially when it's done as well, as incisively, as precisely, as joyously as on this album from Mark O'Connor--American jazz, bluegrass, and classical violinist--and a bevy of famous artists. Among the contributors to the program are soprano Renee Fleming, classical guitarist Sharon Isbin, bluegrass-country singer and composer Alison Krauss, cellist Yo-Yo Ma, bassist and composer Edgar Meyer, jazz and pop vocalist Jane Monheit, singer-songwriter James Taylor, mandolinist Chris Thile, country-music singer and songwriter Steve Wariner, and others. It's an all-star cast for an all-star album, worthy of much repeat listening.

One reservation before getting to the music, though: If you're expecting authentic Appalachia bluegrass, you might be in the wrong aisle. An Appalachian Christmas is a pop album through and through, albeit a good one, with modern, sometimes jazzy arrangements and a big, plush sound. The aim appears to be to appeal to as many different types of listeners as possible, not just bluegrass purists or dedicated country fans. To that end, the album succeeds.

From among the sixteen selections on the disc, let me mention just a few. Things begin with Mel Torme and Bob Wells's classic "Christmas Song" ("Chestnuts Roasting on an Open Fire"), here done up by singer Jane Monheit, jazz artists Frank Vignola and Gary Mazaroppi, and violinist O'Connor (who is on all the tracks). Like the rest of the music, it's up close, with good body, definition, and impact but little depth or air. Like the music itself, it's a pure pop sound, what we've come to expect from most albums of popular music for the past few decades. Audiophiles beware.

Next, it's "Away in a Manger" with opera star Renee Fleming, supported by O'Connor and the Royal Philharmonic Orchestra. OK, that's not exactly Appalachian country, to be sure, and, in fact, while being lovely the number seems rather overproduced for so simple a tune.

On the other hand, "O Christmas Tree" and Leroy Anderson's "Sleigh Ride" sound wonderful for their modest, unassuming presentations, the latter highlighted by a healthy, thumping bass. Then, we get James Taylor doing "Ol' Blue," a great old song but one that seems to have only tenuous connections to Christmas.

Although "Carol of the Bells" could have used more bells, the guitar and piano fill in nicely to complement O'Connor's violin. Which brings us to "Slumber My Darling," featuring the voice of Alison Krauss and the cello of Yo-Yo Ma in a touchingly melancholy rendition of the lullaby. It's kind of a showstopper, actually, and may bring tears to your eyes.

"Winter Wonderland" gets a snazzy, upbeat treatment, sung by Jane Monheit again. A few tracks later, Renee Fleming does "Amazing Grace" with just O'Connor accompanying her, and it's another moving moment in the album.

The mandolin in "One Winter Night" and "What Child Is This" is effective, as are the vocals of Steve Wariner in "Now It Belongs to You." Bach's "Jesu, Joy of Man's Desiring" finds a pleasant new setting, eventually turning into a jaunty gigue with violin, synthesizer, and the London Studio Orchestra.

The program ends with a violin and guitar account of "Appalachia Waltz," which is as fitting a conclusion to the proceedings as one could want, even if, again, its relationship to Christmas seems flimsy at best.