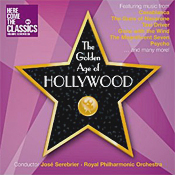 I didn't know this: The Royal Philharmonic's own RPO label has a series it's doing called "Here Come the Classics," and they're up to number seventeen, the current volume called "The Golden Age of Hollywood" and devoted, obviously, to the musical scores of classic movies. Conductor Jose Serebrier seems to be having a grand old time with the music, too, treating it as seriously as if it were Beethoven or Stravinsky and providing it with all the color and pizzazz it needs.

The album contains fifteen tracks covering excerpts or suites from eleven films, all of them done up in fine fashion. As for the music, take your pick of favorite scores; here are a few of mine, starting with a nine-minute highlights suite from Max Steiner's Casablanca, with an emphasis on a piano fantasia based on "As Time Goes By," with pianist Roderick Elms.

Another favorite of mine is a four-movement suite from Bernard Herrmann's music for Psycho. The disc provides four separate tracks for various themes--the Prelude, "The Stairs," "The Murder," and the finish. It all sounds quite effective, with Serebrier maintaining a vivid forward thrust.  Eeek! Eeeek! Eeeeek!

Next, Miklos Rozsa's "Parade of the Charioteers" from Ben-Hur is appropriately gaudy and grand. But probably the most-influential music in the set is Erich Wolfgang Korngold's score for the Errol Flynn film The Sea Hawk. The swashbuckling opening theme is so memorable, I doubt that we'd have half the music of John Williams without it.

Then it's on to the movie hardly anyone remembers, Dangerous Moonlight, with the music almost everyone knows, Richard Addinsell's faux-romantic "Warsaw Concerto." Pianist Elms and Maestro Serebrier play it as though Liszt or Rachmaninov had written it, and again it impresses one with its melodic invention.

The program ends with "Tara's Theme" from Max Steiner's score for Gone with the Wind and then Elmer Bernstein's Overture for The Magnificent Seven. In between these items, you'll also hear music from The Big Country, Spellbound, The Guns of Navarone, and Taxi Driver. Serebrier may be aging but he hasn't slowed down, his interpretations as vigorous as the movies' original soundtracks.

The sound, recorded at Waterford Colosseum, London, in 2005 is very big and very wide to match the scope of the movies involved. There's a solid bottom end, if not too deep or strong; a slightly thick upper bass; a smooth midrange; and an extended if somewhat tizzy high end. The latter trait is an odd distraction in an otherwise fine sonic picture, and it left my ears ringing a little by the end of my listening session. The acoustic offers a reasonable sense of depth for the orchestra and a wide dynamic range, too, making a respectable showing on the audio side if you tone down the treble a bit. The catch came when I compared the RPO sound to a similarly themed album I had on hand, Film Spectacular! Vol. 2, a Decca Phase-4 recording from 1963. The older recording, although done up in a much more-expensive remastering from FIM, sounded clearer, cleaner, more dimensional, more dynamic, you name it. And it didn't leave my ears ringing. Maybe if you want the best, you pay for it.

Finally, the RPO disc boasts a terrific set of booklet notes on each of the films and composers represented, which alone may be worth the price of the album.