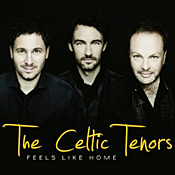 The Celtic Tenors--Matthew Gilsenan, James Nelson, and newest member Daryl Simpson--came along in 2000 as an extension of the Three Irish Tenors and have been going strong ever since. They sing mainly Irish, Scottish, Welsh, and English tunes on the present album, done up at times in a sort of operatic style. I reviewed one of their discs previously, Remember Me, a few years ago as I recall, and was singularly unimpressed. Not that the singing itself wasn't excellent, but most of the songs were too saccharine for my taste. This time out, it's more of the same, although I enjoyed them a little more. Maybe I'm just getting softer with age.

The opening song, "Going Home," sets the tone for the album with a big, plush sound for a ballad written by American songwriter Mary Fahl. It's pleasantly nostalgic, although the accompaniment seems too elaborate for so simple a tune. With most of these numbers you've got drums, percussion, pipes, whistles, strings, guitar, bass, piano, the Omagh Community Youth Choir, and the Radio Teilifis Erin Concert Orchestra in the background, sometimes all going at once, and it rather overpowers, or at least takes away from, the singing.

The next song, "Red-Haired Mary," is more traditional and folklike, which is why the heavy orchestration again seems out of place. Still, the tenors treat it so vibrantly, it comes across with a good deal of fun and excitement.

"No Frontiers" and "Galileo" left me unmoved, despite their popular origins. "Silent Sunset" has the distinction of being a song by Yusef Islam, whom most of probably still know as Cat Stevens. Unfortunately, it is not one of his vintage compositions. Randy Newman wrote the title number, "Feels Like Home," and it's typical Newman--light, catchy, sentimental, melodic.

As you have undoubtedly guessed by now, there is a lot of love, emotion, longing, caring, friendship, and the like involved in this collection. The Celtic Tenors are not folk singers per se, so don't expect the Clancy Brothers or Tommy Makem here. They're basically crossover pop singers, appealing to a diverse pop audience; they're just better singers than most such pop vocalists.

The Tenors do "She Moved Through the Fair" a cappella, which I enjoyed most all. They are such fine singers, they really don't need all the background accompaniment distracting from the purity of their voices. Likewise, "The Wild Mountainside," a lovely ballad with minimal accompaniment, is quite affecting, as is the traditional Welsh lullaby "Suo Gan."

Perhaps the group saved the best for last, "Westering Home." Except for again having an exceedingly thick orchestral and choral background, it's a song that genuinely touches the heart, and the Tenors give it a relaxed, joyful, heartfelt interpretation.

The producers recorded the album at JAM Studios, Kells, County Meath, Ireland; Studio 1, RTE Radio Centre, Dublin, Ireland; and 1st Omagh Presbyterian Church, Omagh, Northern Ireland, in 2011, and Telarc Records, Concord Music Group, are distributing it. The sound is fairly close and loud, with little sense of space or air, just a kind of broad sonic field. It might work as pure commercial pop, but it conveys little sense of occasion or presence.

Look, as I say, this is a pop album, aimed squarely at entertaining as many people of all ages and all musical persuasions as possible. As such, it will probably sell another million copies. For me, most of it was forgettable. But, then, I don't even own an iPad, so who am I to criticize other people's taste?

Email ThisBlogThis!Share to TwitterShare to FacebookShare to Pinterest
Labels: Vocal